Best Places to Visit in Amsterdam

Amsterdam and life. Everybody wants to go to Amsterdam. Whatever our purpose. A day trip, a weekend trip, a two-week vacation, or live forever. Whatever the outcome, we would like to see Amsterdam, the city of canals and art.

Best Places to Visit in Amsterdam

If you want to tell you the first ten places to visit in Amsterdam, enter the first street on your left channel and bridge over the channel, see the magnificent canal houses on your right, that's all we can say. Amsterdam is actually a giant museum with art galleries, museums, cafes, magnificent houses, and history. Wherever you go, no matter what time you go, you can find something you need to see or do.

Amsterdam is one of the most entertaining parts of our travel ideas series. We can offer you many suggestions from the drinks you need to drink to the meals you need to eat. Or you can briefly ask the waiter at the cafe you go to. This is Amsterdam. Amsterdam is a city where shyness and lack of self-confidence disappear. It is a city where you can wonder everything and experience what you wonder. We can say that the city where the limitless is felt most, for Amsterdam.

We think that the most crucial issue you should pay attention to during your trip to Amsterdam is to go to the places you want to see very early. For many museums, getting an entrance ticket means a ticket queue or entrance queue for hours. Since the museums made up of houses do not receive a large number of visitors in terms of capacity, guests are forced to enter in groups. This can be a problem for you if there is a place you say goes in the afternoon.

As I said, Amsterdam is a huge museum. I would like to share with you how you can make the most efficient tour in a short period of time and where to see it. However, I must say that; If you just walk around the streets in Amsterdam and have a coffee by the canal, you can be sure that you will be satisfied when your journey ends and you arrive at the airport. That's why I'm saying, Amsterdam is a vast museum.

Table of Contents
Best Places to Visit in Amsterdam 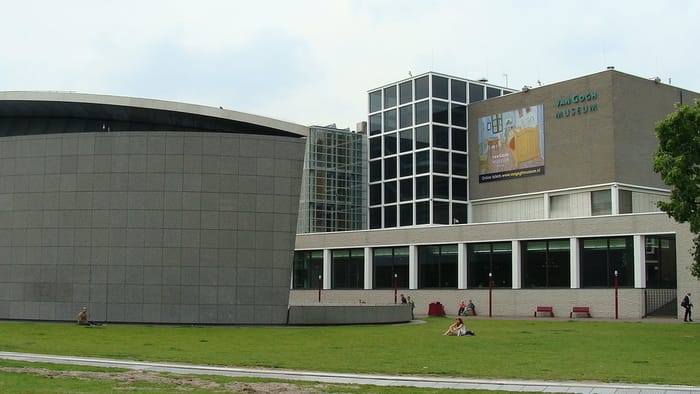 
Amsterdam is a city intertwined with art, so it would not be wrong to start our Amsterdam trip from the Van Gogh Museum, one of the most visited museums dedicated to a single artist in the world. Vincent Willem van Gogh was one of the most famous painters of all time, who lived from 1853 to 1890. He is such a famous painter that even a person who is not very interested in art is familiar with some famous Vincent van Gogh oil paintings. The Van Gogh Museum was opened on 2 June 1973 to honor the famous painter and to pass on his works to future generations. When you see the museum building that attracts attention with its contemporary architecture, you will understand how much importance is given to the project. The building of the Van Gogh Museum, home to the world's largest collection of Van Gogh drawings and oil paintings, was designed by Gerrit Rietveld and Kisho Kurokawa and is located in the Museum Square. When you visit The Van Gogh Museum, you will have a chance to see approximately 200 paintings, 400 drawings, and 700 letters. And in the light of technological developments, Meet Vincent Van Gogh Experience will take you to the world of Vincent van Gogh. Even experiencing this unique experience may be the reason for visiting Amsterdam. 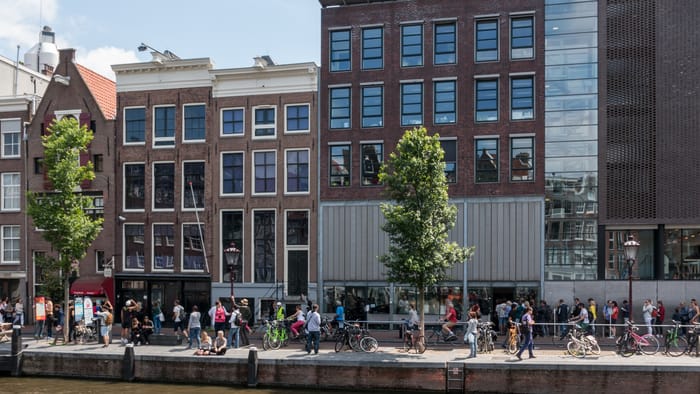 
Due to its historical importance, Anne Frank House is one of the places that must be visited in Amsterdam. Between the years 1942 and 1944, Anne Frank was hide for 671 days in the secret section of this canal house, called Secret Annex, with her family and four people, during the German occupation of the Netherlands. The memories of Anne Frank, who wrote a diary during this period and became a better writer every day, were brought together by Otto Frank, the only surviving member of the family after the war, and published in 1947. Established in 1957 to preserve the memory of Anne Frank, Anne Frank Foundation bought this canal house built in 1635 by Dirk van Delft and turned it into a biographical museum. Anne Frank House opened its doors to visitors on May 3, 1960. Visiting Anne Frank House is like witnessing history. Anne Frank, who failed to survive from the Second World War and died in the Bergen-Belsen concentration camp in February or March 1945, left an important legacy to the next generations. Despite the decision to demolish the entire block in 1955, Anne Frank's diary inspired the public to save the house where she was hidden for about two years, and Anne Frank's legacy is preserved and maintained through Anne Frank House. 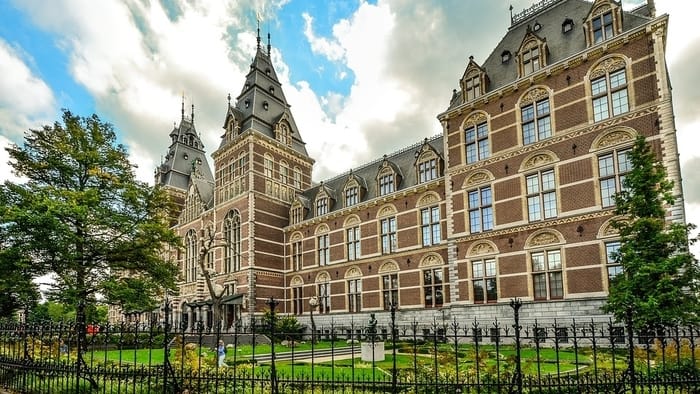 
Amsterdam is a city full of art. Amsterdam offers its guests an experience that they will not find in another city with its museums and art galleries. It is certain that you will have difficulties while planning to visit museums during your visit to Amsterdam, but the idea of ​​not visiting some of them is unthinkable. Rijksmuseum is one of them. Dedicated to the art and the history of Amsterdam, Rijksmuseum is definitely one of the best places to visit in Amsterdam. Rijksmuseum, located in The Museum Square, was founded on 19 November 1798 in The Hague, one of the cities on the west coast of the Netherlands, and moved to Amsterdam in 1808. Moved to its current building designed by Pierre Cuypers in 1885. In addition to the artistic values of the Rijksmuseum, the details of the building are enough to impress the visitor even before you step inside. The collection of Rijksmuseum, the largest art museum in the Netherlands, consists of more than 1 million objects and about 8,000 of them are on display. In addition to the masterpieces of famous Dutch artists, the small Asian collection on display at the Asian pavilion, designed by Cruz y Ortiz and opened in 2013, attracts visitors. It is essential to visit the Rijksmuseum to get to know the Dutch art history and Amsterdam closely. RIJKS, the restaurant with Michelin star that opened its doors in 2014, adds a different dimension to your Rijksmuseum trip. 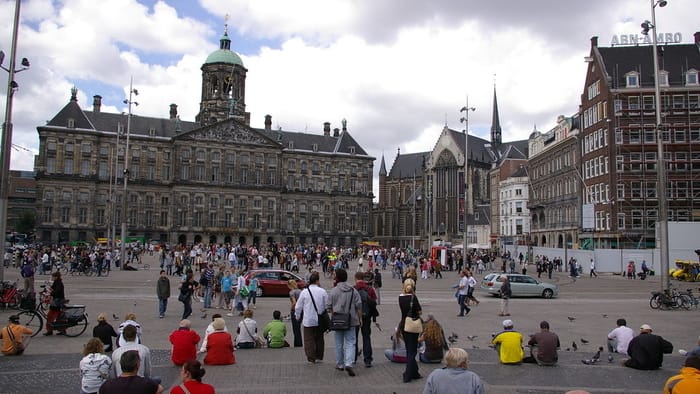 
Of course, one of the best places to visit in Amsterdam is Dam Square. Even if you are spending a day in Amsterdam, leaving this magnificent city without visiting this gorgeous city square is unthinkable. The Dam Square, the most famous square in both Amsterdam and the Netherlands, is 200 meters long and 100 meters wide and is a frequent destination for tourists visiting the city. Connecting Damrak and Rokin streets, Dam Square is at the end of Amsterdam's world-famous shopping streets Nieuwendijk, Kalverstraat, and Damstraat. You can witness the history of Amsterdam and get to know the spirit of the city closely at Dam Square, which you reach after shopping. The Royal Palace of Amsterdam, the 15th-century church The Nieuwe Kerk, and the Madame Tussauds Amsterdam Wax Museum are the most important buildings in Dam Square, one of the best places to visit in Amsterdam. The National Monument has also been part of Dam Square since 1956. The Dam, which was created in the 1270s, served as the marketplace of the city for a long time, and with the start of the construction of The Royal Palace of Amsterdam in 1648, its political and cultural importance increased and became the center of the city. Dam Square, which has been the signature of the city for many years, is the place where you can visit the city for free and get to know the city in the closest and most intimate way, like the squares in all cities. 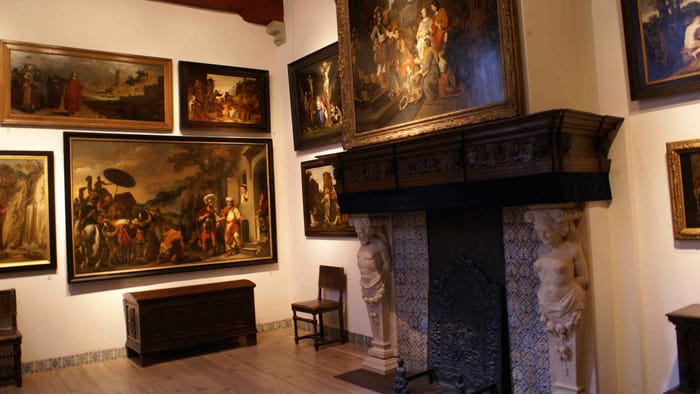 Related Articles
TRAVEL - EDITORIAL
Best Places to Visit in Istanbul
Istanbul is the center of civilizations. The capital of the largest empires in history. The meeting point of religions. Istanbul is the only city that connects two continents.
by Melisa Kaya
TRAVEL - EDITORIAL
Best Places to Visit in Barcelona
If you're preparing for a trip to Barcelona, ​​the biggest mistake you can make is to buy a round trip ticket. Because when you step into sunny Barcelona, ​​you will not want to return until you finish visiting every street in the city.
by Melisa Kaya