Best Places to Visit in Rome

Rome, once the capital of the world, has not lost anything of its charm. Whether you plan to stay for a day or a couple of weeks, Rome offers an unforgettable holiday with unique places to visit.

Best Places to Visit in Rome

Rome is the city of art and love. The Italian capital, which is unique in every aspect, is divided by the Tiber River. It has divided both the geographical and cultural structure of the city. With a history of about three thousand years, Rome is home to many ancient sites. However, the city is so unique that in addition to visiting museums and palaces, even the buildings that are lined up on the streets where you walk and where people live look at you as if inviting you.

The biggest mistake that can be made while visiting Rome is to forget to enjoy the spirit of Rome while rushing from the museum to the museum. If you want to enjoy your trip to Rome fully, you should not pass quickly by any fountain, statue, or square, or even the details of the stone and tiles you step on as well as the surrounding buildings.

Rome also represents a very different dimension due to the presence of the Vatican City. Every street, every corner, every square, and every bridge of Rome smells of history. Whether you come for a day or stay for months, Rome will always offer you best places to visit. I'm sure even many Roman residents can't say they have visited everywhere in Rome.

Visiting museums and palaces full of unique artworks all day long will allow you to take a break and taste the delicacies of Italian cuisine. Don't make your trip to Rome just a museum-to-museum tour. Please do not forget to throw a coin in the Fontana Di Trevi, drink coffee in a stylish bistro, and taste unique Italian cuisine, and these are essential parts of this experience.

You can plan a day in Rome with a route before you leave your hotel, or choose the fun and try to improvise and experience the beauties of Rome. I don't know which one to choose, but I know what places you have to visit before leaving Rome.

We have put together the places to visit in Rome. You can make your own Roman trip plan by making your own choices according to your interests. Just be sure to enjoy the charming atmosphere of Rome while running among the magnificent buildings.

Table of Contents
Best Places to Visit in Rome 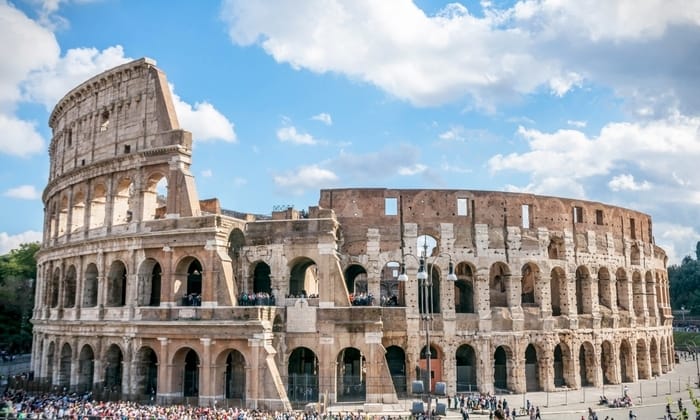 Best Places to Visit in Rome - The Colosseum


The Colosseum ranks first in the list of places to visit in Rome since AD ​​80. The Colosseum, part of the Roman identity, is located in the center of the city of Rome, Italy. In order to understand the thousands of years of history of Rome and its constant charm, you must see all the details inside and outside the Colosseum. The oval amphitheater, also known as the Flavian Amphitheater, was the largest amphitheater of its time with a capacity of 50,000 spectators. The Colosseum, which was started to build in AD 72 during the emperor Vespasian period, was inaugurated by the emperor Titus in AD 80. The Colosseum, which has been enlarged with different renovations throughout history, has increased the audience capacity up to 80.000.
The Colosseum, a sumptuous building with a length of 189 meters and a width of 156 meters, had an outer wall height of 48 meters. When you visit the Colosseum, you may lose yourself in the depths of Roman history by imagining gladiator competitions, the executions, re-enactments of famous battles, and staged Classical Mythology dramas. The Colosseum, which has been destroyed due to earthquakes, maintains its magnificent appearance today and is one of the most visited tourist attractions in the world. If you do not visit the Colosseum, you will not be considered to have visited Rome. 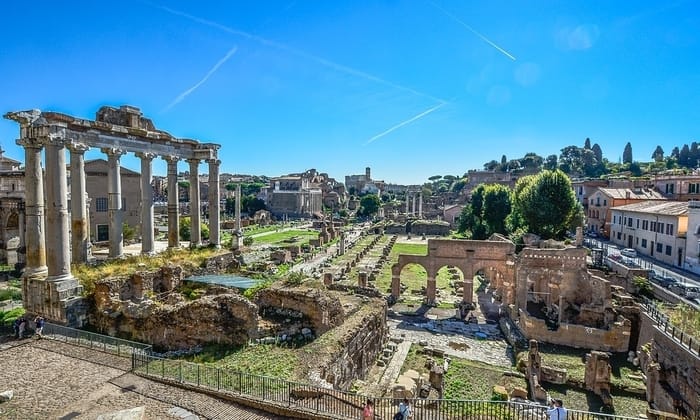 Best Places to Visit in Rome - The Roman Forum


Our second stop in Rome is the Roman Forum, which sheds light on the history of Rome and is perhaps home to ruins even before Rome was founded. The first meeting at The Roman Forum is thought to be alliance talks between Romulus, one of the founders of the Roma, and his rival, Titus Tatius. The Roman Forum, which has hosted many important events since then, was the most popular forum in the heart of Rome. The Roman Forum, which includes some of Rome's most important buildings, such as the Temple of Saturn, the Arch of Titus, the Temple of Castor and Pollux, the Sacra Via, The Rostra, and the Temple of Vesta was the place where Roman history was determined until it was destroyed in 410 AD. The Roman Forum, which hosted Gladiator fights before the Colosseum was built, has hosted such elections, criminal trials, public meetings, religious ceremonies, and business dealing throughout its history.
When you visit the Roman Forum, you can be sure that you walk where Roman emperors, gladiators, philosophers, and artists once walked. Please take a look at the current ruin of the Roman Forum, located between Palatine Hill and Capitoline Hill, and use your imagination to visualize what a magnificent forum it once was. Remember that the Roman Forum, one of the touristic attractions you must visit during your trip to Rome, was once at the center of Roman life. If you want to get a better understanding of Rome, pay attention to all the details of the Roman Forum and make sure you get as much information as possible during your tour. 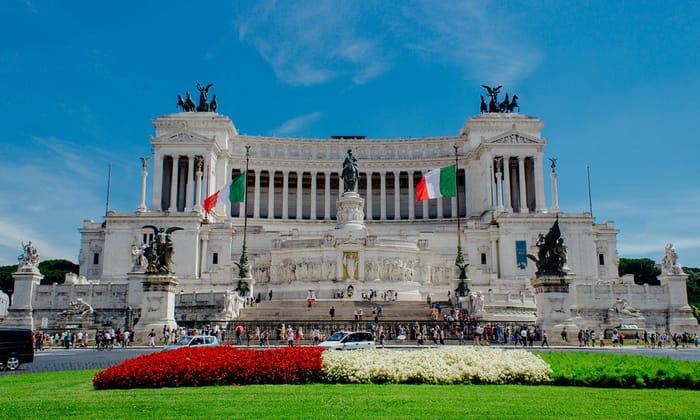 
Piazza Venezia, one of the busiest squares in Rome, is one of the attractions you will see during your visit to Rome, whether or not you are on your list, because you will surely pass. It is therefore wise to mark it as a stopover on your trip map, so you can explore in detail all the beautiful buildings and monuments it hosts. Palazzo Venezia, located on the west side of the square, is an important building that gave its name to this famous square. The palace was built between 1455-64 for the Venetian Cardinal Pietro Barbo and is now home to the Museo del Palazzo Venezia. You can start your trip from this building and take lots of photos. The Monument to Vittorio Emanuele II is the symbol of Piazza Venezia.
One of the best places to visit in Rome, Piazza Venezia is surrounded by cafes and restaurants, where you can taste Italian cuisine. Surrounded by historic buildings, the square is the central hub of Rome, making it a very convenient place to understand everyday Roman life. In Piazza Venezia, opposite the famous shopping street Videal Corso, you can spend time with history and culture and experience the sophisticated lifestyle of Rome. Basilica Papale di Santa Maria Maggiore, the largest Catholic Marian church in Rome, is very close to Piazza Venezia and is definitely one of the must-visit buildings when you come to this area. 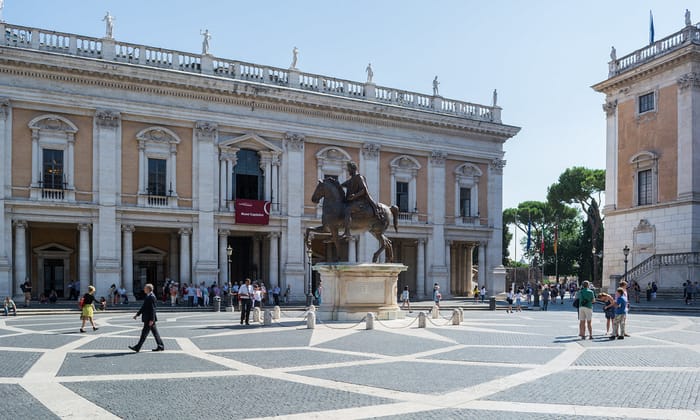 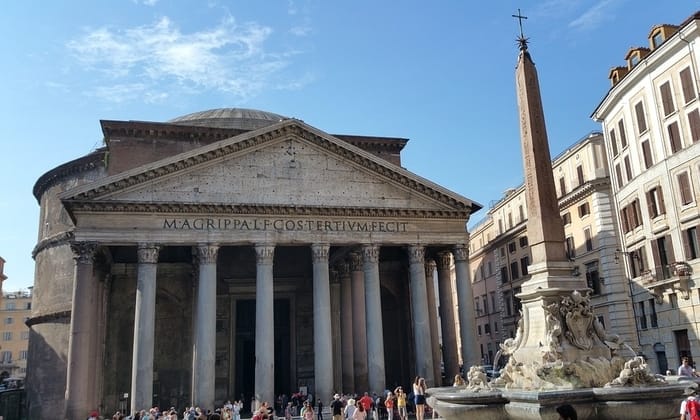 Best Places to Visit in Rome - The Pantheon


The Pantheon is another must-see masterpiece on your trip to Rome. One of the best-preserved Ancient Roman buildings, the Pantheon has a unique architectural design that was copied by many architects after its own age. The Pantheon, incorporating all the theories of ancient Roman architecture, combines design, functionality, elegance, and harmony. The splendor you will see from the outside, or the inside has a fascinating effect.
The construction of the former burned-out building of The Pantheon began in the same period as Marcus Agrippa's complex construction project The Baths of Agrippa and the Basilica of Neptune. The construction of the present building began in 113, and the construction was completed in 125 during the reign of the emperor Hadrian. The building, which is basically two-part, paved the way for new architectural innovations. The Roman concrete dome of The Pantheon is a unique work with its grandeur and hidden architectural mathematics. At first glance, when you enter into the back of the building, which is rough and simple looking, you will feel that you are stepping into a completely different world of elegance. Make sure the day you visit The Pantheon is a sunny day. You must see the light beams that illuminate the interior by entering from the top midpoint of that magnificent dome. 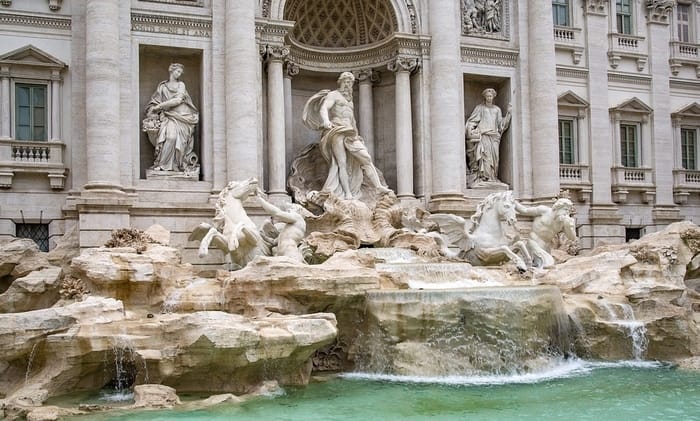 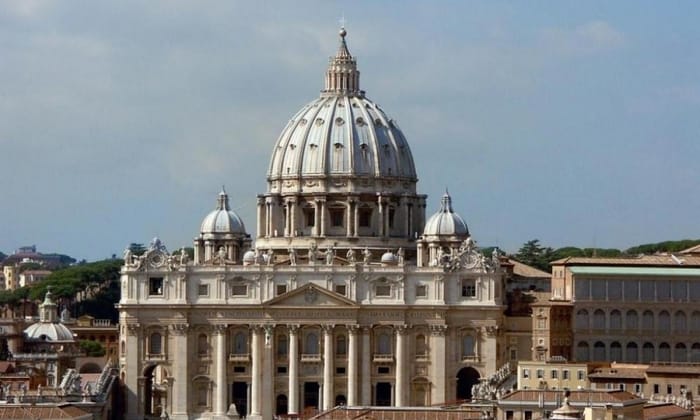