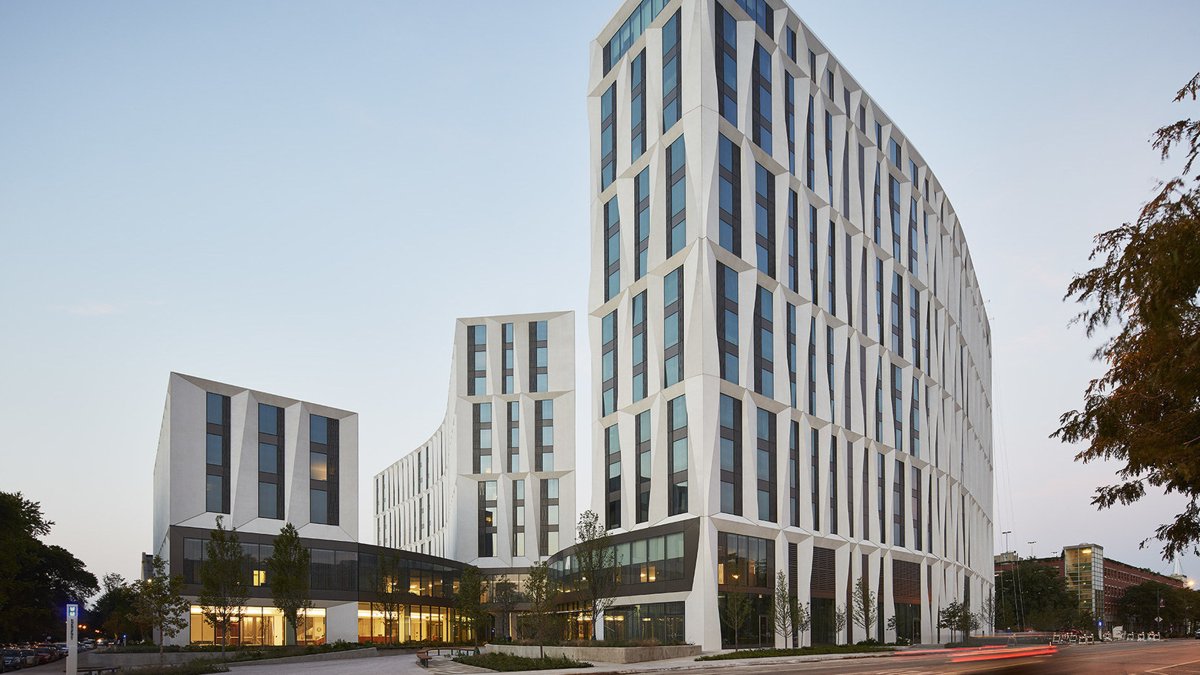 The University of Chicago's Campus North Residential Commons has won three awards from the prestigious Design-Build Institute of America, including the first-ever Chairman's Award for Community Impact and Social Responsibility.

The University of Chicago's Campus North Residential Commons has won three awards from the prestigious Design-Build Institute of America, including the first-ever Chairman's Award for Community Impact and Social Responsibility. Following a highly competitive judging process, the university's first major design-build project was one of two recipients of this new honor and also won awards for merit and excellence in design.

The Chairman's Award for Community Impact and Social Responsibility was created this year to "reward design-build teams which have shown extraordinary commitment to triple bottom-line success-economic, environmental and social-and which have clearly improved the communities they've engaged," said DBIA CEO and Executive Director Lisa Washington.

Washington also commented that the UChicago team, led by design-builder Mortenson Construction and architect Studio Gang, "went above and beyond" to engage the Hyde Park and Chicago communities. Chicago residents performed 39.87% of the workforce hours; and minority- and women-owned businesses received 43.96% of the construction dollars paid to date.

"We are very proud to receive these awards for the Campus North project from the Design-Build Institute of America," said Larry Blouin, UChicago executive director of capital project delivery. "The university set ambitious and visionary goals for this residence hall, from the design and construction to LEED Gold certification and community involvement and connection, and the DBIA awards recognize these achievements."

"Underscoring the university's commitment to academic success and sustainability, all of the systems of the building work together to ensure high-performance standards for both the students and the architecture," said Jeanne Gang, founding principal of Studio Gang. "We designed an architecture that really feels like home for the students, but that simultaneously opens to and engages with the community."

"Like UChicago and Studio Gang, we at Mortenson believe how you build is as important as what you build," said Greg Werner, Mortenson senior vice-president and head of the Chicago office. "Our project team was passionate about generating economic opportunity for businesses and individuals in the Hyde Park and greater Chicago communities. I am thrilled to say we far exceeded our original project goals for a diverse workforce and minority- and women-owned business participation."

The Campus North residence hall opened in fall 2016, a full year ahead of the university's original plan due to the efficiencies of the design-build process. The 400,000-square-foot residence hall is composed of four buildings, ranging in height from a single-story dining commons to a 15-story residential tower with a student Reading Room at the top. The buildings overlap, forming a new portal at the corner of the university that is complemented by plazas, walkways, courtyards, and retail. The portal welcomes both students and the community to campus, inviting them to enjoy these new amenities.