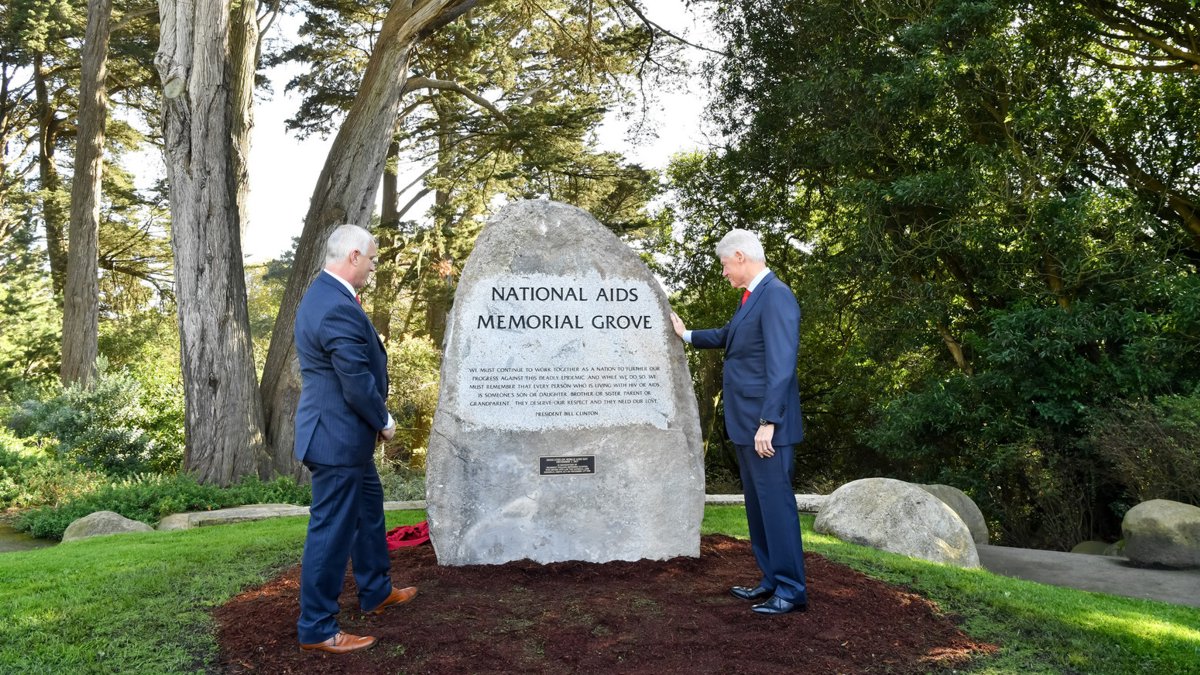 The National AIDS Memorial marked World AIDS Day honoring leaders in the HIV/AIDS community who have made a significant difference in the fight against AIDS. President Bill Clinton, who designated the memorial as the country's sole federally-designated National AIDS Memorial in 1996, delivered keynote remarks and spoke to the hope the future holds, while always remembering the precious lives lost to the epidemic.

As part of the ceremonies, the National AIDS Memorial dedicated a large boulder at the entrance of its Moonwalk staircase which leads to the historic grove in honor of the president, who has courageously brought the issue of HIV and AIDS to the forefront through his leadership and compassion. Inscribed on the boulder is a quote from the president which reads, "We must continue to work together as a nation to further our progress against this deadly epidemic, and while we do so, we must remember that every person who is living with HIV or AIDS is someone's son or daughter, brother or sister, parent or grandparent. They deserve our respect and they need our love."

President Clinton was an early advocate and important voice at the height of the AIDS epidemic, establishing the Office of National AIDS Policy and securing significant funding for AIDS prevention, research and treatment programs. After leaving the White House, President Clinton founded the Clinton Foundation and the Clinton Health Access Initiative (CHAI). Since its founding, CHAI has helped 11.6 million people in more than 70 countries receive greater access to HIV-AIDS medications. CHAI has also catalyzed the scale up of AIDS treatment to over 823,000 children, helping reduce the costs of pediatric ARV regimens by over 80 percent.

"At a time when many national leaders paid little attention to the AIDS epidemic, President Bill Clinton helped create a national memorial to forever honor the lives lost to AIDS," said John Cunningham, executive director of the National AIDS Memorial. "This sacred ground has become a place that honors all who have been touched by HIV/AIDS and forever keeps their spirit, their love and their stories with us so future generations never forget. This memorial provides us with hope and inspiration to continue working tirelessly until we find a cure."

"Today, with advancements in diagnostic testing and highly effective treatments, people with HIV and AIDS can go on to live healthy and happy lives," said Jay Wohlgemuth, MD, Senior Vice President, R&D, Medical and Chief Medical Officer, Quest Diagnostics. "Quest Diagnostics is honored to support the National AIDS Memorial and its mission to honor the lives lost to AIDS and help ensure their stories are forever known by future generations."

Quest Diagnostics is the presenting sponsor for the 2017 National AIDS Memorial World AIDS Day commemoration events. A leading provider of diagnostics information services dedicated to advancing disease management for the HIV community and raising the standards of care in HIV diagnostics, the company has been a long-time supporter of the National AIDS Memorial supporting its volunteer workday programs and mission to forever honor the lives lost to AIDS.

This year's World AIDS Day observance highlights the memorial's mission of remembrance, healing and hope. Personal stories were shared, reflecting back at the height of the epidemic when so many lives were being shattered by AIDS. The day included honoring people who courageously fought for equality and justice in the AIDS movement, including survivors and advocates who cared for the dying and partners who lost their lovers; those spearheading advancements in testing, diagnostics and treatments; and the next generation of leaders who carry the torch forward in helping find a cure for the devastating disease.

In addition to honoring President Clinton, awards were presented to other leaders in the HIV/AIDS community including: The Humanitarian Leadership Award to David McMurry, retired Global Public Health Manager at Chevron, for his work leading their world-wide AIDS programs and services for people in need; the Thom Weyand Unsung Hero Award to Ruth Coker Burks, also known as the "Cemetery Angel" for her work in the darkest days of the epidemic in Arkansas, where she cared for hundreds of young gay men abandoned by their families; and the "Lifetime of Commitment" Award to former California State Senator Mark Leno for his decades of unwavering philanthropy, activism and leadership in support of HIV/AIDS, LGBT communities and civil liberties.

Underscoring the next generation of leaders in the AIDS movement, awardees of the 2017 Pedro Zamora Young Leaders Scholarship were also announced with several of them sharing their personal stories, demonstrating the hope for the future in the fight against AIDS.

"Much has changed in our world since the height of the AIDS epidemic," said Kelly Gluckman, one of the six scholarship recipients, who attends the University of California Los Angeles. "Today, there is greater hope and awareness among young people as we can live a healthy life with HIV, something our brothers and sisters before us did not have the chance to do. In their honor, our generation must work tirelessly to end the bigotry and stigma surrounding HIV and AIDS and commit ourselves to tell their stories, educate others about prevention, treatments and continue the work to finally find a cure."

The National AIDS Memorial is a dedicated space in the national landscape where millions of Americans touched directly or indirectly by AIDS can gather to heal, hope, and remember. The National AIDS Memorial, known as "the Grove", was created more than twenty-five years ago in San Francisco's Golden Gate Park at the height of the HIV/AIDS epidemic as a place where those impacted by AIDS could both grieve and begin the process of healing. In 1996, legislation sponsored by U.S. Representative Nancy Pelosi was signed into law by President Clinton that elevated "the Grove" as this nation's sole federally-designated National AIDS Memorial. Today, nearly 40,000 individuals from around the world have contributed 200,000 volunteer hours to support the National AIDS Memorial and its mission to provide, in perpetuity, a place of remembrance so that the lives of people who died from AIDS are not forgotten and the story is known by future generations.