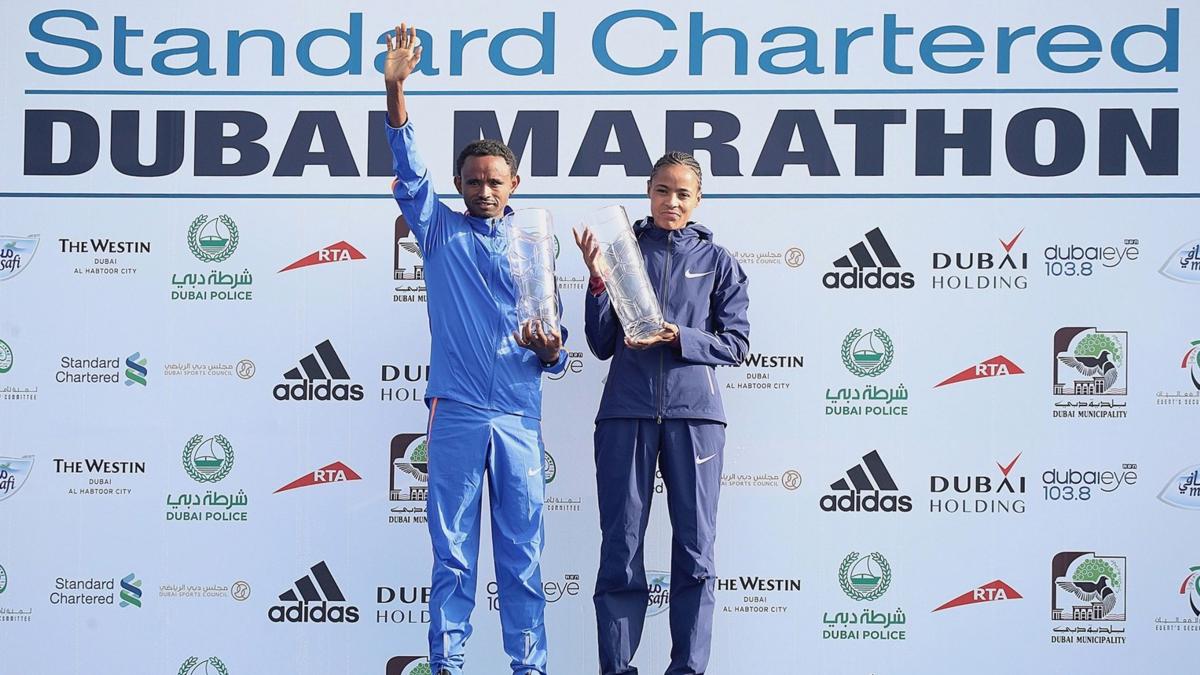 Ethiopia's Mosinet Geremew won the Standard Chartered Dubai Marathon with a course record of 2h:04m:00s in one of the most thrilling finishes in marathon history.

Held under the patronage of HH Sheikh Hamdan bin Mohammed bin Rashid Al Maktoum, Crown Prince of Dubai, and under the aegis of the Dubai Sports Council, the 19th edition of the Standard Chartered Dubai Marathon once again had athletics writers scurrying through the record book

In near perfect weather conditions, the leading group ran a very consistent pace. After a half marathon split time of 61:36, the world record of 2:02:57 was still in reach at 30k, which was passed in 1:27:35. However, after the last pacemaker dropped out, the pace fell and the athletes focused on winning the US$200,000 first prize.

Five runners were still in contention when the group entered the home straight but in the end it was the runner who entered the Dubai Marathon last who came in first.

The women's race also produced record-breaking results as Roza Dereje clocked a women's course record of 2:19:17 and with it became the seventh fastest woman in marathon history.

The Ethiopian broke away from a leading group of four in the final mile of the race and for the first time in marathon history four women ran sub-2:20 in one race. Ethiopia's Feyse Tadese took second in 2:19:30, followed by Yebrgual Melese (2:19:36) and defending champion Worknesh Degefa in 2:19:53.

"I was happy to run at the pacemaker's pace for the opening half," said Geremew after receiving his trophy from HE Major General Mohammed Khalfan Al Rumaithy, President of the General Authority For Sports, and Julian Wynter, Standard Chartered Bank UAE CEO. "When did I think I could win? I only thought about winning when I had one kilometre to go."