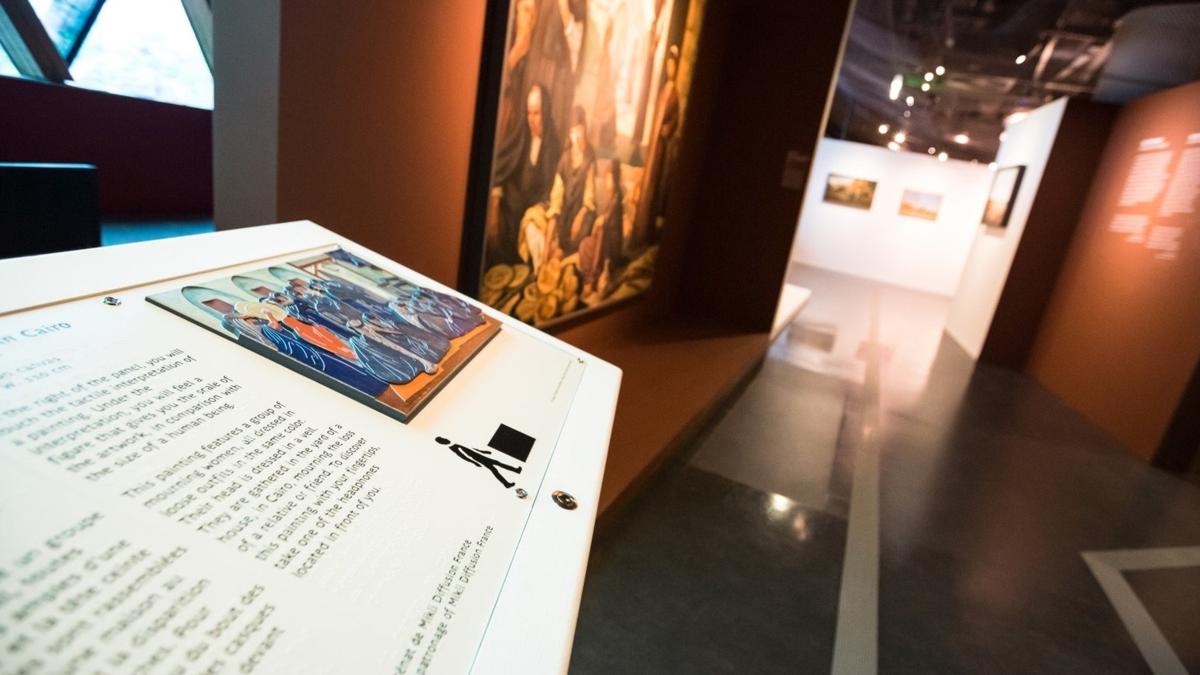 Océ's 'elevated printing' technology is on display in Paris at the musée du quai Branly - Jacques Chirac this year, from January 30 through January 6, 2019.

The Dutch producer of high-tech printing solutions, a Canon company, developed the printing process used to produce high-relief interpretations of three paintings for visually-impaired visitors, with explanation and background provided in audio and Braille alongside.

The paintings are part of a large show entitled 'PEINTURES DES LOINTAINS' (PAINTINGS FROM AFAR), consisting of works produced by Western artists, representing the perception of Asian, African and Oceanian peoples by Western societies in the colonial era. The selected paintings interpreted in relief are: Fighting antelopes, Jean Dunand (1930); Portrait of Savorgnan de Brazza, Alphonse Monchablon (1886); and Mourners in Cairo by Émile Bernard (1894).

Océ's technology provides these interpretations with an unmatched tactile precision, up to representing through relief and texture effects the artist's pictorial technique. Visitors can thus discover the stylized representations of figurative elements, performed by Jean Dunand in his work Fighting Antelopes and touch up to the rosette of the Legion of Honor, the most prestigious award granted by the French republic that Pierre Savorgnan de Brazza wears on the lapel of his jacket. In addition, the visual aspect of these interpretations, in conformity with the high-definition photographs they are based on, enables partially-sighted visitors who can look at them as closely as they need, to enjoy the unmitigated radiance of the colors displayed by the Mourners in Cairo.

"By interpreting a painting into a tactile image you open a door for blind and partially-sighted people to a world that they thought they could not access. Now, we are able to have a grasp of what a work of art is and experience the beauty of it," says Aymeric Vildieu, Communication Officer for patronage projects at Mikli Diffusion France and blind from his birth.

This project is an initiative of Mikli Diffusion France, a Paris-based company that commercializes the high-fashion eyewear brand Alain Mikli. As an extension of its purpose of improving its wearers' sight, for over 25 years, the company has been a regular supporter of sight-related causes through skill-based patronage actions.

The exhibit at the musée du quai Branly - Jacques Chirac is one of several showcases for the various uses of Océ's 'relief printing' technology. Earlier, the same process was used to create exact reconstructions of Egyptian pharaoh Seti I's high relief walls, pillars and sarcophagus. This for a show at the Antiken Museum in Basel. The same technology was used in the small Dutch town of Grave to produce special, tactile 'street signs' - attached to lamp post and traffic lights - to guide the visually impaired.

Océ, founded in 1877, is a global leader in digital imaging, industrial printing and collaborative business services. Océ's mission is to accelerate new digital print technologies and transform them into local printing products and services for blue-chip multinationals around the globe and creative studios around the corner. A Canon Group Company, Océ operates a vast global network of R&D centers to connect emerging digital print technologies to future markets. Océ is headquartered in The Netherlands, in the heart of Europe's hi-tech corridor.