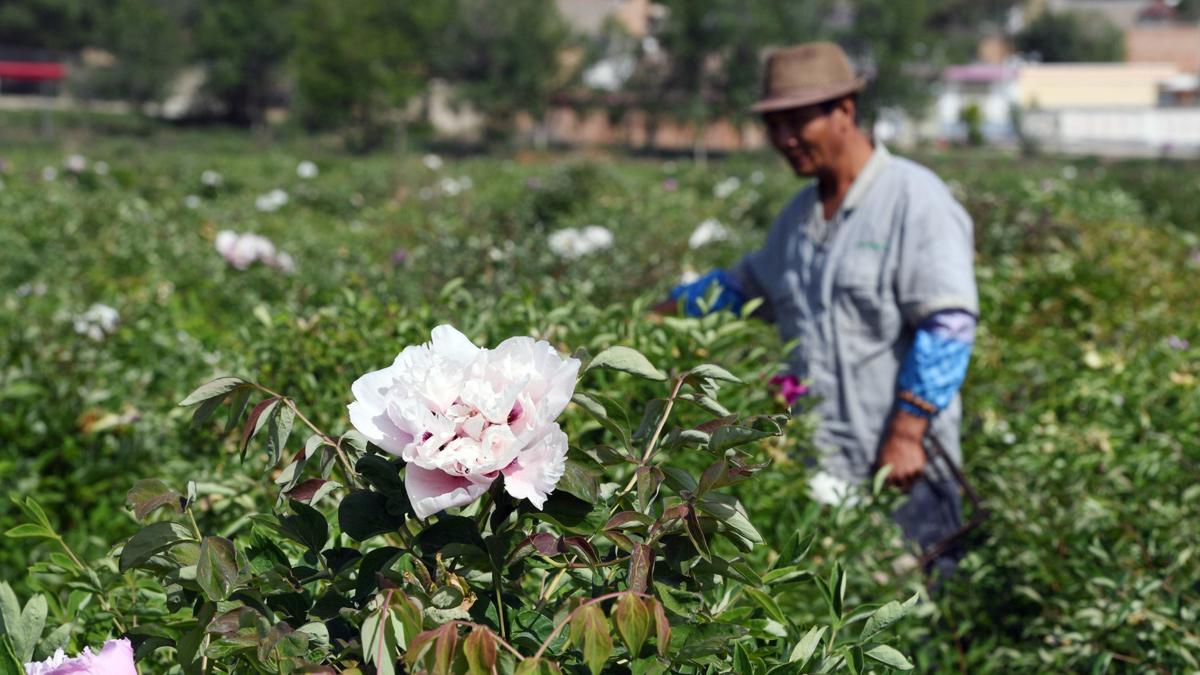 On May 22, local peony farmers are checking the conditions of oil peonies in a plantation base.

As one poem goes, while ordinary flowers have withered in April, the peonies in the mountains are just in full bloom. In May, various rockii peonies are blossoming in Linxia Hui Autonomous Prefecture of Gansu Province. After two years of efforts, the peony tour at Gansu Linxia Hui Autonomous Prefecture began to take shape. This May is Linxia's first "peony month". The colorful rockii peonies grow along the Binhe Road in Linxia, forming a peony promenade up to 60 miles long. Initial statistics from the Linxia Tourism Bureau showed that from May 1 to May 24, Linxia received about 2 million visitors. Walking around the garden, one can enjoy the charm in the ancient poem which goes as "Huang Si Niang's home is full of flowers which are closely packed".

Peony has many properties. Its root and bark can be used as a medicine. Rockii peony is also a good woody oil crop that can be refined. In addition, peony's pistil and stamen, petals, and leaf buds can all make tea.

Wangping Village is the only mountainous poor village in Linxia. The village now has planted more than 170 mu of peony and is known as the "the first peony village in Hezhou". About 172 of the village's 252 households were poor families in 2013, but the number was reduced to six at the end of 2017. Now the village has set up an oil peony plantation cooperative. According to villagers' calculations, planting wheat makes little money, but planting peony seedlings, with a single cycle of 5 years, saves labor and can bring farmers over 100,000 yuan per mu.

He Shenghong, also known as Linxia's "Peony King", is the pioneer of the peony industry in Wangping Village. He not only circulates land for seedling cultivation, but also develops peony tea products and peony alcohol. Peony stamen tea is sold by grams, which can sell at almost 10,000 yuan per 500 grams. The poverty alleviation in the northwest is like rockii peony, which will bloom one day though it blossoms late, He said.