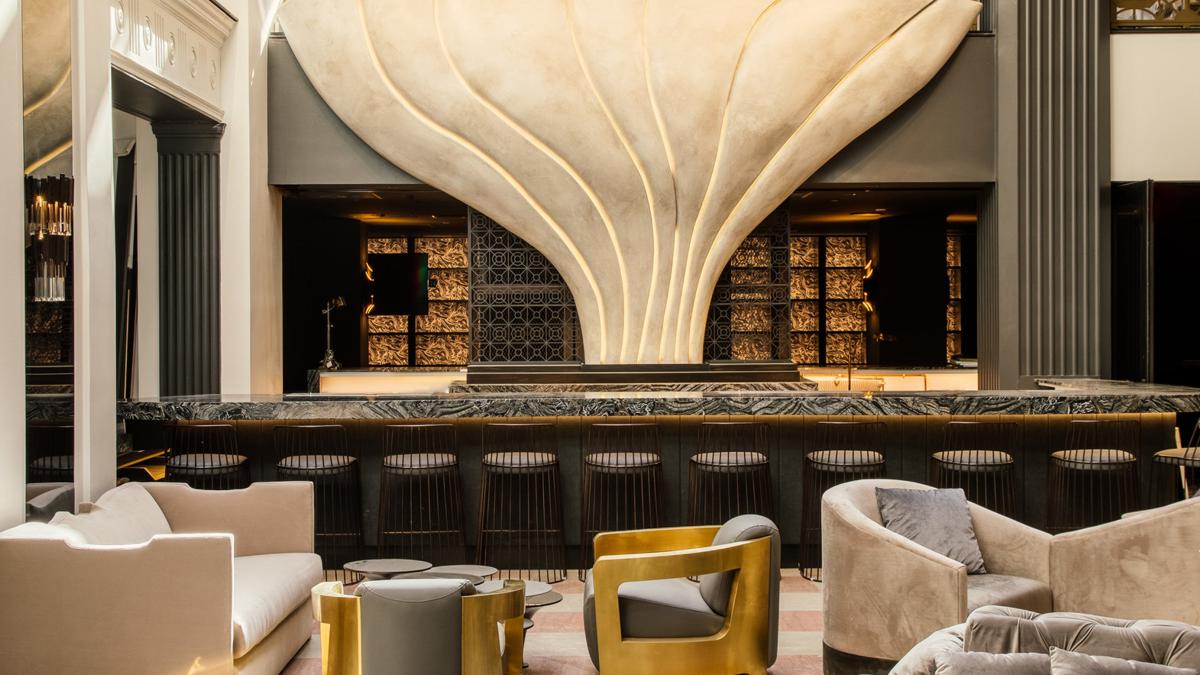 On July 10, 2018, The Mayfair Hotel, an historic Downtown Los Angeles hotel established in 1926 and managed by Crescent Hotels and Resorts, will reemerge, following a top-to-bottom redesign, and unveil glamorous new spaces, dining and guest programming that reinterprets its authentic early 20th century character with distinctly Los Angeles style and substance. Located in Downtown Los Angeles' emerging neighborhood of Westlake, the Mayfair has undergone a redesign overhaul led by Los Angeles-based developer ICO Group of Companies, who commissioned Gulla Jónsdóttir Architecture & Design and Artist-in-Residence Kelly "RISK" Graval, both based in the City of Angels, to modernize the spaces while faithfully adhering to the building's original architecture and thoughtfully outfitting the interiors with contemporary visual exhibitions, including art and photography.

The 15-story, 294-room hotel has been skillfully redesigned, not only to attract travelers searching for an authentic Los Angeles experience, but also to serve as a beacon of social gatherings for Angelenos. Throughout its multiple venues, including the grand lobby, mezzanine atrium, Eve American Bistro, M Bar, The Library Bar, art gallery, and stylish meeting and event spaces, The Mayfair offers a boutique experience for guests who appreciate good food and drink, rich historic character and vibrant creativity.

The tallest building west of the Mississippi River when it opened in 1926, the 15-story Mayfair gained its distinctive presence from designer Alexander Curlett and architect/designer Claud Beelman, the latter recognized for Downtown Los Angeles' aqua-colored Eastern Columbia Building.

Jónsdóttir has built upon that foundation and infused the interior with contemporary glamour that bridges the hotel's Roaring Twenties vintage—original flooring and ceilings, brass fixtures, fluted charcoal-colored column pillars—with a modern Downtown Los Angeles edge. Jónsdóttir constantly referred to the hotel's historic context for inspiration, even consulting the original drawings, which inspired her to recreate the image of the hotel's original tin-like ceiling by building dramatic, black cage chandeliers in the lobby that cast shadows upwards, evoking the 1920s vintage design.

Jónsdóttir's historic design is contextualized to modern-day Los Angeles with the help of artwork curated by Artist-in-Residence Kelly "RISK" Graval. A renowned artist with pieces displayed in international gallery, RISK will showcase a different artist on each floor—with his own work hanging on the 15th – and oversee the multi-million-dollar art collection at The Mayfair.

To conceptualize the hotel's bevy of on-site culinary options, The Mayfair partnered with Hospitality Alliance, a bicoastal management, development and consulting company to program and manage Eve American Bistro, M Bar, The Library Bar, catering and the outdoor pool (opening later in 2018).

Executive Chef Scott Commings—winner of Fox's "Hell's Kitchen" Season 12—makes his Los Angeles debut with Eve American Bistro, the hotel's signature restaurant. The stylish eatery takes its name from Eve Cressy, the main character of Raymond Chandler's short story "I'll Be Waiting," which he wrote while living at The Mayfair with his mistress in the 1930s. Presenting a feminine take on the traditional European-style bistro, Eve's menu puts forth flavorful dishes with influences from Modern American cuisine, such as Duck Confit, Braised Octopus Carpaccio and Lobster Truffle Mac & Cheese.

Overlooking the main lobby on the second floor is the mezzanine's Garden Gallery, which will serve as a sun-drenched atrium featuring a vibrant nature-inspired green wall, a 15-foot olive tree, an exquisite black and white marble console, and tufted couches to relax over coffee underneath the expansive skylight.

Fairgrounds Coffee & Tea, the Chicago-based company, will open its fourth outpost at The Mayfair Hotel, bringing the next wave in coffee culture to Downtown Los Angeles. Located adjacent to the lobby lounge, the coffee roaster and tea purveyor's selection will include cold brews, kombuchas, sparkling teas on tap, chef-driven house-made sandwiches, salads and snacks.

Inspired by its prominent role in the city's 1920s social scene—The Mayfair Hotel hosted the first post-Academy Awards party in 1920—the hotel's public venues will reflect an extensive arts and music program creating a new, dynamic social hub for Angelenos and travelers to immerse themselves in artistic freedom. Leading the charge on this front will be Kelly "RISK" Graval, along with Kevin Zinger and Ivory Daniel of Regime 72, a Los Angeles--based talent management agency known for its diverse involvement in music, art, film and fashion on a global scale.

RISK's curated multimillion-dollar art collection will be found throughout the hotel's public spaces including hallways, food and beverage outlets, and art gallery slated to host special exhibitions. Meanwhile, the Regime 72 collective is putting their deep industry knowledge and resources to work on behalf of The Mayfair to produce first-class events and activations, including monthly art exhibits, live concerts, fashion events, trio jazz nights and immersive DJ sets by local and globally renowned acts.

Featured components of the arts and entertainment programming will be a custom-built Podcast Studio inside The Library that will showcase professional podcasters and be available for guests to use for their own creative broadcasting sessions. Adjacent to the bar and perfect for creative types is a Writing Room that includes a large communal table for guests to utilize as a workspace.

With picturesque views of the City of Angels, the 15-story building's flexible accommodations span size, price and style to offer guests a uniquely suited Downtown Los Angeles escape. Guestrooms and suites showcase a contemporary take on 1920s glamour. A unique feature in select rooms is a wall, which abuts the headboard, covered in a vintage mural map of Los Angeles. The map was originally created in 1929 by cartographer/historian Herbert E. Floercky and is titled "Amusement Map of Los Angeles County." Released during a historic time of national economic despair, the map pinpoints key landmarks and attractions, including The Mayfair Hotel, in hopes of promoting enthusiasm for folks to come out west.