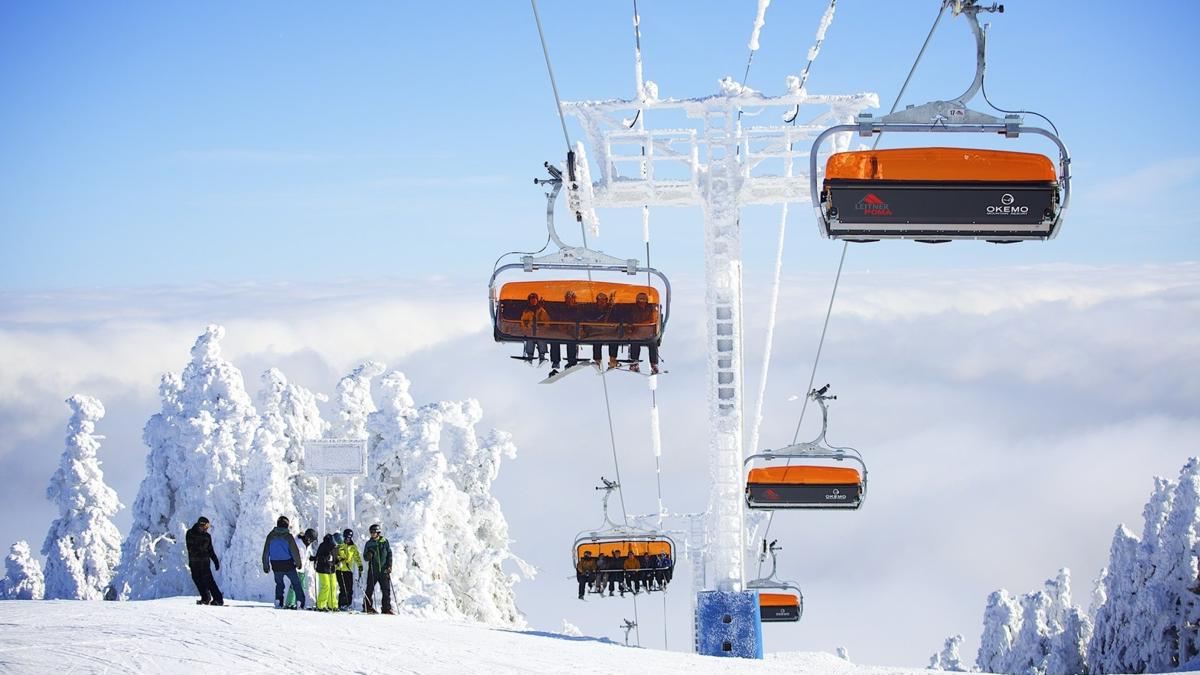 Vail Resorts, Inc. (NYSE: MTN) announced today that it has entered into an agreement to purchase Triple Peaks, LLC, the parent company of Okemo Mountain Resort in Vermont, Mount Sunapee Resort in New Hampshire, and Crested Butte Mountain Resort in Colorado. The Company will purchase Triple Peaks, LLC from the Mueller family for a purchase price of $82 million, subject to certain adjustments. At closing, Triple Peaks will pay $155 million to pay off the leases that all three resorts have with Ski Resort Holdings, LLC, an affiliate of Oz Real Estate, with funds provided by Vail Resorts.

As part of a separate transaction, Vail Resorts will also purchase Stevens Pass Resort in Washington from Ski Resort Holdings, LLC, who was advised on the sale by Houlihan Lokey, for a total purchase price of $67 million, subject to certain adjustments. Both transactions are subject to certain closing conditions, including regulatory approvals.

"Together, the acquisitions of Okemo, Mount Sunapee, Crested Butte, and Stevens Pass will significantly enhance the Vail Resorts' network of resort experiences, adding even more variety and choice for all of our pass holders and guests. Okemo and Mount Sunapee are terrific complements to Stowe in the Northeast, as is Crested Butte to our four Colorado resorts, and Stevens Pass for our Whistler Blackcomb and Seattle guests," said Rob Katz, chairman and chief executive officer of Vail Resorts. "Additionally, each of these resorts will individually offer guests from around the world entirely new and distinctive experiences in extraordinary locations from coast to coast."

"We know our guests and employees will benefit from Vail Resorts' outstanding track record of resort and community investment, environmental stewardship, and employee development," said Tim Mueller, president of Triple Peaks, LLC. "We care deeply about the legacy of these resorts, and have absolute confidence in Vail Resorts to celebrate what makes them so special, while also providing long-term stability for the communities."

"Triple Peaks, LLC and the Mueller family and Karl Kapuscinski, the tenant and operator of Stevens Pass Resort, have been outstanding operators of these resorts and we have valued our association with them," said Steven Orbuch, founder and president of Oz Real Estate. "We are excited for the opportunities that these transactions create for Vail Resorts and its guests while providing a beneficial outcome for our investors."

When the transactions close, the 2018-19 Epic Pass, Epic Local Pass, Epic Australia Pass, and Epic Military Pass will include unlimited and unrestricted access to all four resorts, with seven and four unrestricted days for the Epic 7 Day and Epic 4 Day passes, respectively. Whistler Blackcomb Edge Card holders will be able to use any of their U.S. days at Stevens Pass, subject to the restrictions on each card. "We are thrilled that the Epic Pass and our other season pass products will now provide our pass holders around the world with even more variety and unique experiences to choose from," said Kirsten Lynch, chief marketing officer of Vail Resorts.

After closing of the two transactions, Vail Resorts plans to invest $35 million over the next two years across the four resorts to continue to elevate the guest experience. In addition, annual ongoing capital expenditures are expected to increase by $7 million to support the addition of these four resorts. Together, these acquisitions are expected to generate incremental annual EBITDA in excess of $35 million in Vail Resorts' fiscal year ending July 31, 2019.

The transactions are expected to close this summer. Operations at the four resorts for the remainder of the 2018 summer season will continue in the ordinary course of business, as will future winter seasonal hiring. Upon closing, Vail Resorts plans to retain the vast majority of each resort's employees and will be working with the local leadership teams in the coming months to determine the right long-term management structure for the resorts.

Crested Butte Mountain Resort, located in southwest Colorado's Grand Mesa Uncompahgre and Gunnison (GMUG) National Forests, is known for the colorful and historic town of Crested Butte, renowned mountain peaks, and legendary skiing and riding terrain. The resort was established in 1961 and has since passed through three families. The Muellers added Crested Butte to their family of resorts in 2004, following their 1982 acquisition of Okemo Mountain and 1998 acquisition of Mount Sunapee.

On the other side of the United States, Stevens Pass, with its exciting terrain and plentiful snowfall, will be the Company's second resort in the Pacific Northwest. The resort, less than 85 miles from Seattle, sits on the crest of Washington State's Cascade Range within two national forests, the Mt. Baker-Snoqualmie National Forest on the west side of the crest and the Wenatchee National Forest on the east.

Epic Pass™: Ski or snowboard unlimited and unrestricted from opening day to closing day for only $899. The Epic Pass pays for itself in just over four days of skiing or snowboarding. Enjoy full access to Vail, Beaver Creek, Breckenridge, Keystone, Crested Butte Mountain Resort and Arapahoe Basin in Colorado; Park City in Utah; Heavenly, Northstar and Kirkwood at Lake Tahoe; Stowe Mountain Resort and Okemo Mountain Resort in Vermont; Mount Sunapee in New Hampshire; Afton Alps in Minnesota; Mt. Brighton in Michigan; Wilmot Mountain in Wisconsin; Stevens Pass in Washington; Whistler Blackcomb in Canada; and Perisher in Australia for the 2019 season. New for the 2018-19 season, Epic Pass holders will receive seven days of skiing or snowboarding with no blackout dates at Telluride in Colorado; seven days at Resorts of the Canadian Rockies, which includes Fernie Alpine Resort, Kicking Horse Mountain Resort and Kimberley Alpine Resort in British Columbia, Nakiska in Alberta, and Mont Sainte Anne and Stoneham in Quebec; and up to five total consecutive days with no blackout dates at Hakuba Valley's nine ski resorts in Japan. The Epic Pass also grants limited access to Les 3 Vallées, Paradiski and Tignes-Val D'Isere in France; 4 Vallées in Switzerland; Arlberg in Austria and Skirama Dolomiti in Italy. A child pass (ages five to 12) is $469.

Epic 7-Day Pass™: For $669, receive a total of seven unrestricted days at Whistler Blackcomb, Vail, Beaver Creek, Breckenridge, Keystone, Park City, Heavenly, Northstar, Kirkwood, Stowe, Crested Butte, Okemo, Mount Sunapee, Stevens Pass and Arapahoe Basin, plus seven additional free days at Afton Alps, Mt. Brighton or Wilmot Mountain. New for the 2018-19 season, Epic 7-Day Pass holders will receive up to seven days of skiing or snowboarding at Telluride and at Resorts of the Canadian Rockies with no blackout dates as part of their seven total days on the pass. After the seven days, regardless of the resort at which they were redeemed, pass holders can get 20 percent off additional lift tickets at Telluride. A child pass (ages five to 12) is $359. The pass pays for itself in just over three days.

Epic 4-Day™: A convenient option for a short ski trip as the pass pays for itself in just over two days and includes a total of four unrestricted days valid at Whistler Blackcomb, Vail, Beaver Creek, Breckenridge, Keystone, Park City, Heavenly, Northstar, Kirkwood, Stowe, Crested Butte, Okemo, Mount Sunapee, Stevens Pass and Arapahoe Basin, plus four additional free days at Afton Alps, Mt. Brighton or Wilmot Mountain. New in 2018-19, Epic 4-Day Pass holders will receive up to four days of skiing or snowboarding at Telluride and at Resorts of the Canadian Rockies with no blackout dates as part of their four total days on the pass. After the four days, regardless of the resort at which they were redeemed, pass holders can get 20 percent off additional lift tickets at Telluride. The Epic 4-Day Pass is $439 for adults and $239 for children (ages five to 12).

Military Epic Pass: In celebration of the 10th anniversary of the Epic Pass on March 18, 2018, Vail Resorts is honoring the epic service of the Company's founders from the U.S. Army's 10th Mountain Division, and the men and women of the U.S. Armed Forces, Canadian Armed Forces and Australian Defence Force with the introduction of a new $99 Military Epic Pass for active and retired military personnel and their dependents – an almost 90-percent discount to the regular Epic Pass price. Additionally, as the first of its kind in the mountain resort industry, all other U.S., Canadian and Australian veterans and their dependents are eligible for a $499 Military Epic Pass, which offers more than a 40-percent discount off the regular price ($269 for children under 18 years of age). Vail Resorts will donate $1 for every 2018-19 season pass sale to Wounded Warrior Project® to benefit wounded veterans and their families, which would exceed $750,000 based on last year's sales. Visit www.epicpass.com/military for all details on military pass options.

Vail Resorts' 2018-19 season passes are on sale now at the lowest guaranteed prices. Visit www.epicpass.com for details and to purchase.