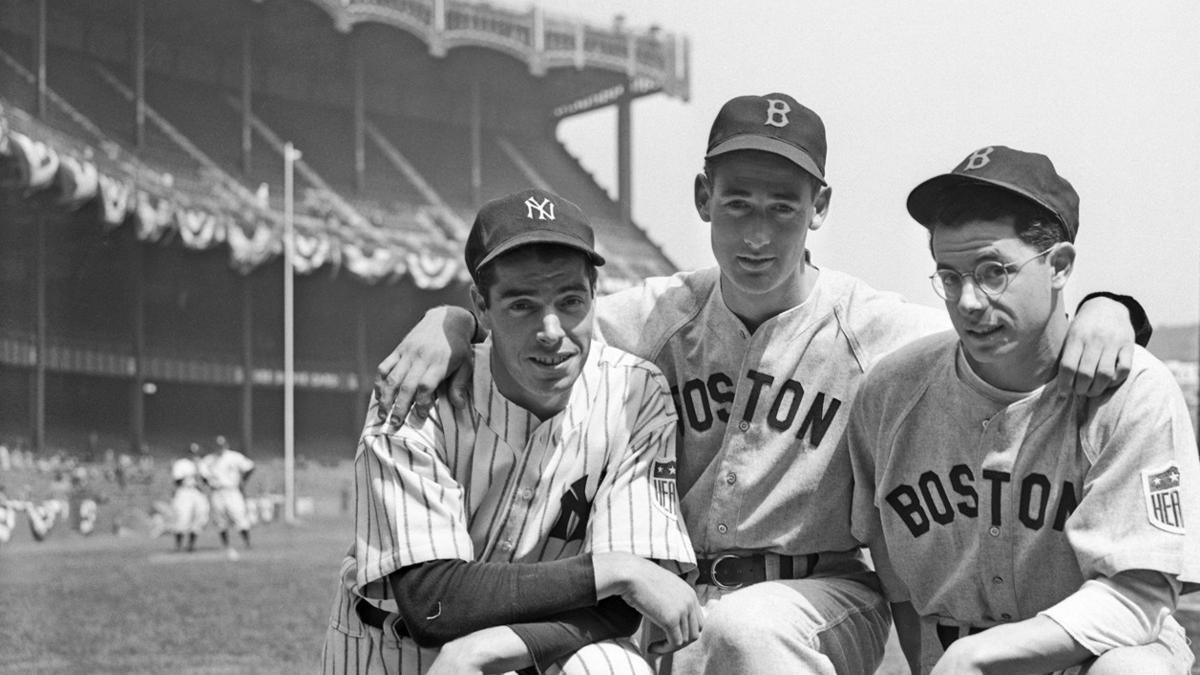 Two of the brothers DiMaggio, Joe, left, of the New York Yankees, and Dominic, right, of the Boston Red Sox, get together with Boston's star outfielder Ted Williams here, before meeting at Yankee Stadium in the New Yorker's first home game

The California Museum announced "California at Bat: America's Pastime in the Golden State" will open on Sun., July 29, 2018. The all-new exhibit chronicles California's baseball history from the Gold Rush to present, revealing its legacy of all-stars and the contributions of female, African American and other players who broke barriers to broaden its enduring appeal. Featuring more than 200 rarely-seen artifacts, highlights include uniforms, equipment and ephemera from Jackie Robinson, Joe DiMaggio, Ted Williams, Willie Mays, Sandy Koufax and others, along with objects from Pacific Coast League teams and from Edmonds Field, home of the Sacramento Solons until 1960.

"We are thrilled to present 'California at Bat,'" said California Museum Executive Director Amanda Meeker. "Although the major leagues didn't arrive until the 1950s, Californians have enjoyed baseball for 160 years. This exhibit offers an unprecedented opportunity to view artifacts representing the sweep of California baseball from 19th century town ball to the legends of baseball's Golden Age and the heroes of the modern era."

Curated by the California Museum, "California at Bat" was developed in collaboration with Stephen Wong, author of three Smithsonian Books, including "Game Worn: Baseball Treasures from the Game's Greatest Heroes and Moments" (2016). A renowned baseball historian and collector, Wong contributed expertise and more than 80 artifacts from his personal collection illustrating many of baseball's most famous players. Highlights include:

San Francisco Giants home jersey game worn by Willie Mays (b. 1931) in 1965, the season he led the NL with 52 home runs and won his second NL MVP Award. Considered the game's greatest all-around player, Mays has lived in California since moving with the Giants in 1958.

Los Angeles Dodgers road jersey game worn by Sandy Koufax (b. 1935) in 1966, the last year of his MLB career and the year he won a third Cy Young Award. A resident of California since moving with the Dodgers in 1958, Koufax is also remembered for sitting out Game 1 of the 1965 World Series when it fell on Yom Kippur, and for pitching baseball's eighth perfect game on Sept. 9, 1965.

"As a native Californian who is deeply passionate about baseball and the history of the game, I'm proud and honored to have been a part of 'California at Bat,'" said Stephen Wong. "I'm delighted to share my collection with members of the public in this extraordinary new installation revealing the state's significant contributions to baseball."

Contributions of Californians who broke barriers are also explored. For example, Jackie Robinson (1919-1972), the first African American to play MLB in the modern era, is heralded through a 1947 Brooklyn Dodgers team-autographed ball, along with a ticket and program from his April 15, 1947 debut. In addition to ending the segregation that had relegated African Americans to the Negro Leagues since the 1880s, Robinson was also the first to win a NL MVP Award, reflected by his 1949 trophy on display.

Accomplishments of California women are shown through uniforms from the All-American Girls Professional Baseball League of the 1940s and modern softball Olympians, while artifacts from Japanese American and Mexican American leagues emphasize the sport's role in facilitating social and political networks in disadvantaged communities.