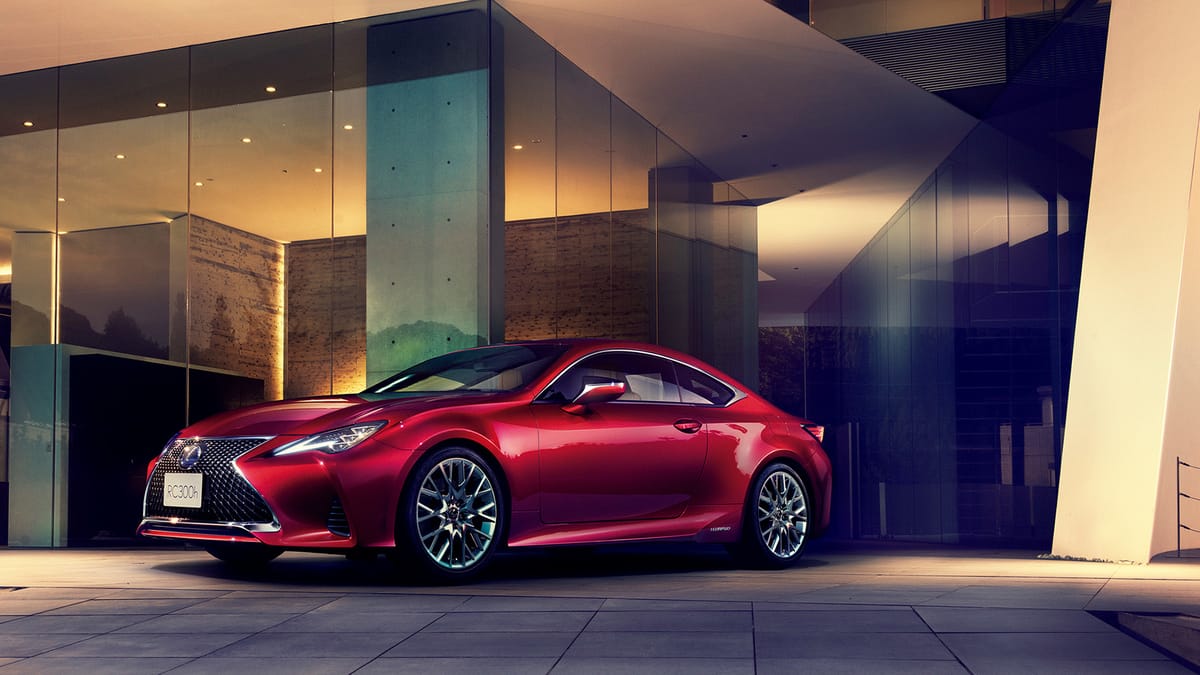 Lexus today announced a new version of the RC luxury sports coupe, which is scheduled to make its global debut at the Paris Motor Show in Paris, France, from October 4, 2018 to October 15, 2018, with sales in Japan beginning in the fall of 2018.

Since its introduction in 2014, the RC has played a major role in promoting Lexus' commitment to delivering an "emotional driving experience" in every single one of its vehicles. Thanks to its svelte sporty appearance and versatile driving character, the RC has since become one of the most popular premium luxury coupes in the marketplace. The fresh new RC retains all the virtues of the current model and then takes them to the outer limits by adopting Lexus' new signature design language and sharpened driving dynamics that was established by the brand's flagship luxury coupe, the LC.

The exterior styling of the new RC remains as sporty as the current model, but subtle changes in the details inspired by Lexus LC design cues, provide it with a newfound sense of elegance. Inside the cabin, everything from the high-quality materials to the precise layout of controls and gauges were crafted to maximize driving pleasure. Also, enhancements have been made to the RC's aerodynamics, tires, suspension, as well as improvements to engine response and steering feel, all of which result in a "sharper and more refined" drive introduced by the LC. The new RC is more stable than ever under a wide variety of driving conditions. This provides a high level of driver confidence and a reassuringly flat ride quality, making it the ideal grand tourer, whether you're challenging a twisty mountain road or simply taking a long-distance commute on the open highway.

Lexus designers sought to maintain the RC's dynamic coupe proportions, while adding a high level of elegance to the exterior. This was done, in particular, through the addition of distinctive design elements, such as a new front bumper corner that flows down from the headlamps and a grille mesh pattern whose shapes gradually transform from top to bottom. Also, vertically arranged extra-small triple LED headlamps and new L-shaped LED clearance lamps add to the car's new, more classy appearance.

Air ducts have been added to the corner of the RC's rear bumpers, resulting in better handling stability and enhanced overall driving response. Its wider stance and lower center of gravity reflect a high ability to maintain its grip under a variety of road conditions. Also, the rear combination lamps now house more pronounced L-shaped lenses that serve as a new signature design feature for Lexus coupes.

In all 11 different exterior colors will be available for the RC, including Naples Yellow Contrast Layering and Sparkling Meteor Metallic that truly convey the car's sporty nature.

The new RC F Sport receives the grille mesh pattern that graces all F Sport vehicles, as well as numerous other custom exterior and interior items exclusive to the F Sport, including aggressively-styled 19-in. alloy wheels that were inspired by those on the LS and LC.

"Hairline" treatment has been applied to the heater control panel and audio panel, which results in a higher sense of quality, while the enlarged knee pads have been raised to sandwich the center cluster, creating a heightened sense of space. The shape of the palm rest is new and stitching has been added to the surface, showcasing the designers' high level of attention to the details.

A new analogue clock, identical to the one in the LC, has sits at the top of the instrument panel, making it an identifying feature for Lexus coupes.

New ornamentation options, such as real aluminum Naguri and Dark Gray Hairline will be made available on the F Sport. In all, the customer can choose from five different types.

Interior colors include Ocher that is also available for the LC, and Mustard Yellow, which is composed of subtle yellow accents on a black background. In all, there are seven exclusive interior color combinations available, including those for the F Sport.

Through master craftsmanship, the new RC realizes the "sharper and more graceful" driving concept of the LC

Taking the driving concept of "sharper and more graceful" that defined the LC, Lexus engineers have succeeded in making the new RC thoroughly fun to drive by focusing their attention on the details, such as enhancing the car's aerodynamics and fine-tuning the suspension system and powertrain. Armed with a flatter and more stable ride quality and sharper handling characteristics derived from the LC, the new RC is more athletic and responsive than ever.

Enhanced aerodynamics―such as a new fin shape on the side window mold and a duct on the rear bumper that improves air flow, result in in better handling stability.

New 19-in. wheels shod with tires with increased grip result in excellent steering response. Also, new shock absorbers, which provide significant damping force from low suspension stroke speeds, and stiffer suspension bushings have been incorporated. Through a significant amount of real-life testing, where the suspension system was constantly fine-tuned by chassis engineers, the new RC delivers an extremely supple ride quality and a razor-sharp handing character.

For a more spirited driving experience, throttle response of the turbocharged 2.0-liter engine has also been enhanced to deliver a more direct feeling of acceleration in the new RC.