Not all Bluetooth speakers have to be contemporary designed, small, and lightweight. Todd Olson designed a different speaker that you can take with you wherever you go. I talked with him about this Cascade Mountains inspired speakers. 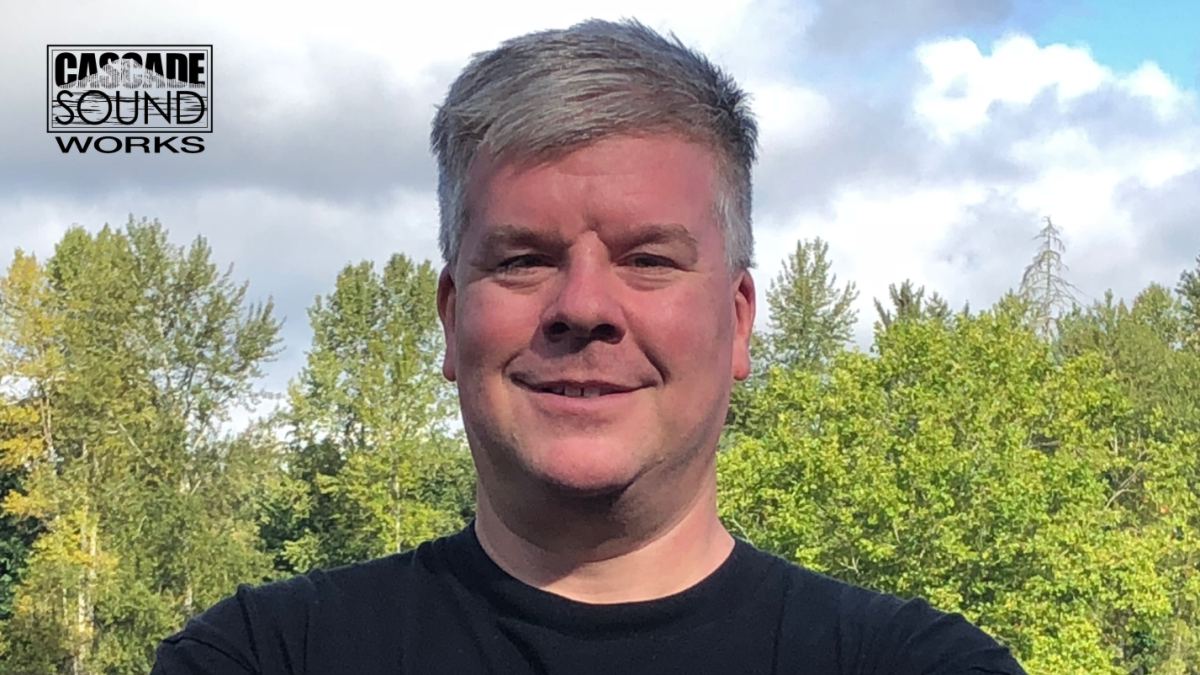 Todd noticed that most of the ammo can speakers had their switches, buttons, and ports on the outside. And he decided to design more compact ammo can speaker and he removed outside parts, which always have damage risk, and add them to inside construction. In 2017, Todd inspired by the Cascade Mountains and established Cascade Sound Works and unveils his first design Kulshan Bluetooth Ammo Can Speaker. I talked to Todd Olson, Founder and CEO of Cascade Sound Works, about his designs and brand.

Todd, before start talking about Kulshan Bluetooth Speakers, could you tell us about yourself? Who is Todd Olson?

When I was a kid, our neighbor was building a biplane in his barn. Not a model, a full-sized plane that he could fly. That made me realize if you had enough determination you could do just about anything. I spent 25 years in the corporate world working logistics and supply chain in the Aircraft Manufacturing business. In 2010 a friend of mine and I started a Liquor Manufacturing Company called OD Beverage Company. That really sparked my entrepreneurial spirit and helped me realize that I wanted to work for myself rather than someone else. I have a multitude of different interests and hobbies - from woodworking to classic cars, so I've always been hands-on when it came to building or fixing things. 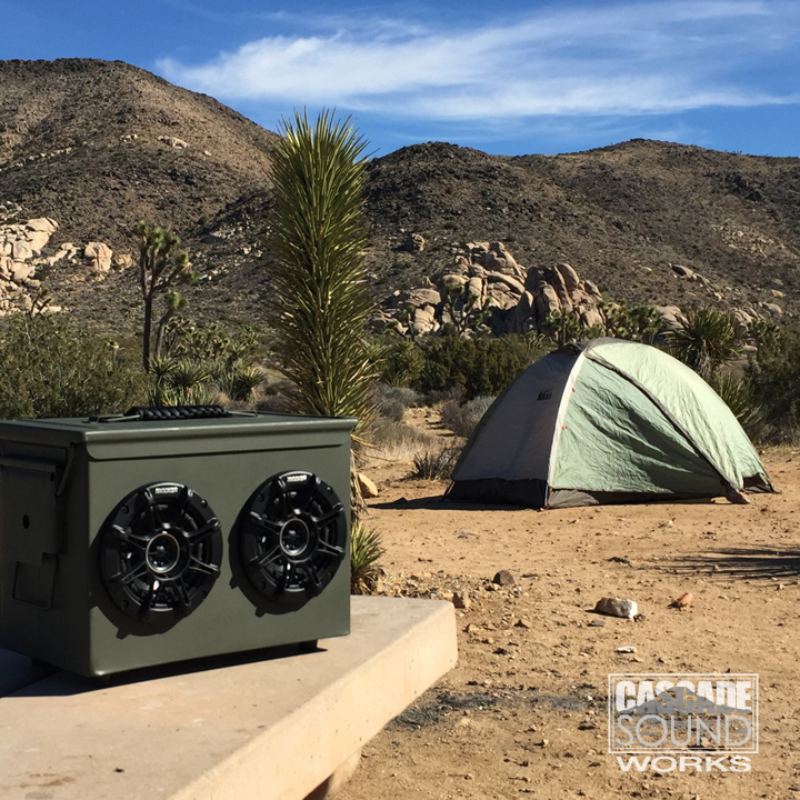 What inspired you to establish Cascade Sound Works?

I have a 1955 Ford truck that I have been restoring and modifying as a sales truck for one of our OD Beverage products - Uncle Cecil's Hard Liquors. It didn't have a radio in it, so I wanted to make something out of a tall, thin ammo can I picked up at an auction. I thought it would fit nicely behind the bench seat and I could take it out when I wanted to tailgate. I get inspiration from Pinterest - there are a lot of creative people out there. So I decided to search for Bluetooth speaker made from an old ammunition can - see if there was something out there already. I found out there were a few companies that were selling ammo can speakers. I also found quite a few DIY instructions out there in places like Instructables.com. The pre-made ones were quite expensive I thought, so I set about making one myself.

Could you tell us more about Cascade Sound Works?

Cascade Sound Works gets its name from the Cascade Mountains and the Puget Sound, two very prominent features in Washington State. I used the Native American names for our three highest peaks to name the speaker models. The largest (the one I designed for behind the Uncle Cecil's truck seat) is Tahoma, named for Mt Rainier. The second largest is Klickitat, Mt. Adams' name. And the smallest speaker is Kulshan, after our third tallest peak Mt. Baker. Here in the Pacific Northwest, outdoor activities are a major part of our lifestyle. From hunting and fishing to camping and boating, there are lots of opportunities for fun and adventure. Even if it's just in the background, music is such an important part of that experience. So we came up with the slogan "Bring Your Soundtrack With You". 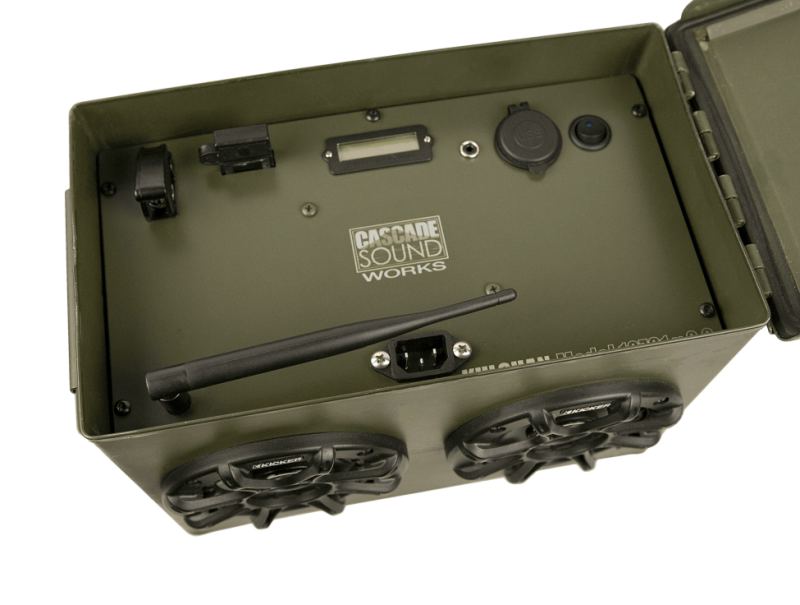 What is your design philosophy? Could you tell us about Smart Functional Design that you apply to your speakers?

When I was researching all the different products available, I noticed that most of the ammo can speakers had their switches, buttons, and ports on the outside. I wanted to be able to throw my speaker in the trunk or the back of the truck and take it anywhere. I thought switches, buttons, and ports on the outside just invited broken switches & buttons and dirt-filled ports. So all of ours are located inside the waterproof/dustproof lid that is already a feature of US Military grade ammo cans. I spent a good deal of time fine-tuning the holes for the waterjet cut aluminum switch plate so that the layout was intuitive and integrated with the rest of the design. Internally, there is a Medium Density Fiberboard box to improve the sound quality of the speaker. A battery charger is integrated into the unit and it will shut off automatically when your battery is completely charged. The LCD readout shows the percentage of battery remaining, not the volts of the battery making it easy to know when you need to charge without doing any conversions or referring to a chart. The Bluetooth antenna is integrated into the amp board, so the range is increased to 100 feet when the antenna is extended. 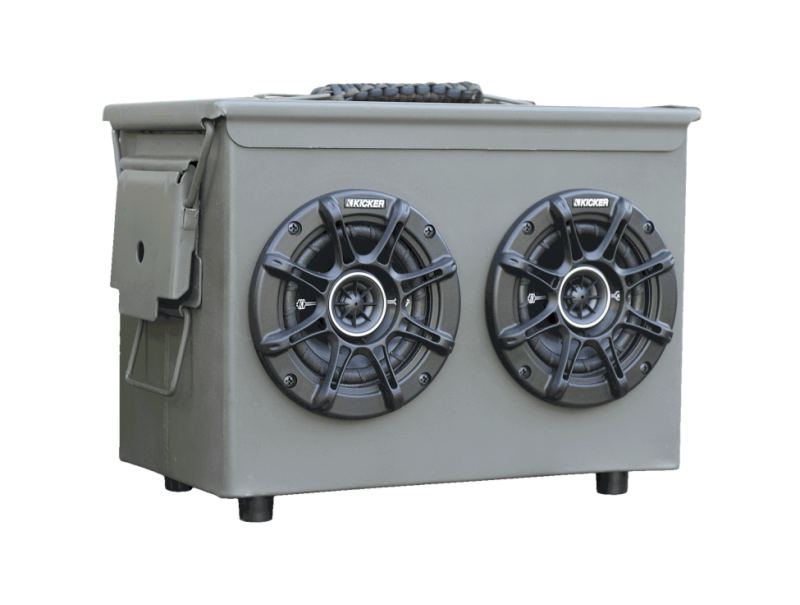 Kulshan Bluetooth Speakers has extraordinary style, it likes a military equipment. What are the features of Kulshan Ammo Can Speaker?

Besides the design features mentioned above, there are custom options that allow you to personalize your speaker even further. You can powder coat the entire unit in any color you want. We have several customers who wanted it to match their favorite vehicle color. One of the popular colors is black matte. It has a nice texture to it and it makes the whole ammo can look super rugged. We can customize the switch plate with personalized engraving. Being close to Joint Base Lewis-McChord, we have a lot of military customers. They like to have their branch of service logo put in there. We also do a lot of messages like "Happy Birthday Finn" for speakers being given as gifts. 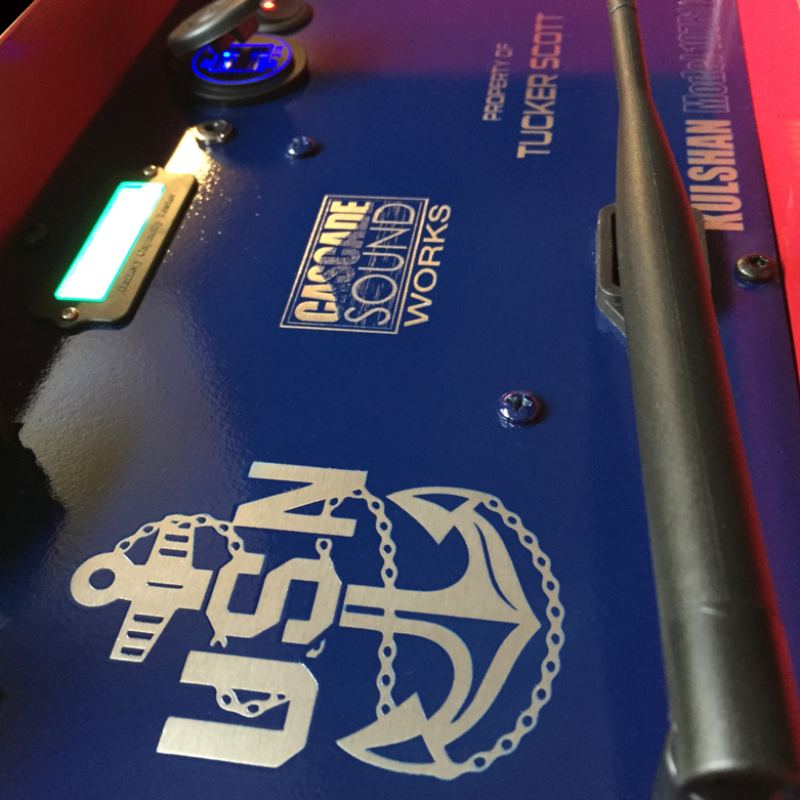 Which feature of the Kulshan mostly reflects you?

I think the feature that mostly reflects me is the repurposed aspect of it. I mentioned before that I like classic cars and restoring them. I would much rather take something old and give it an upgrade than to buy something new. Here is something that by itself originally held ammunition. The box is waterproof and dustproof, so they're great for storing just about anything from tools to Geo-cash clues. This is yet another alternative use for the ammo can and that appeals to me. 99% of people who see it smile or say "That's cool!"

What is the most prominent feature of Kulshan Ammo Can Speaker that make it different from others?

All of the controls are inside the lid. It has a 100-foot Bluetooth range. There's a USB port to charge both a phone and a tablet. And it has an auxiliary port you can plug in anything from a CD/MP3 player to a powered guitar. Rubber feet for stability and a paracord wrapped handle for comfort. All of this is included in the base price, they aren't extras.

Do you have any new design on the drawing table? What should we wait next?

There are a couple models we are working on, that I mentioned before. The Klickitat will probably be our next model. It features four 4" speakers and an AM/FM radio in addition to all the standard features of the Kulshan. 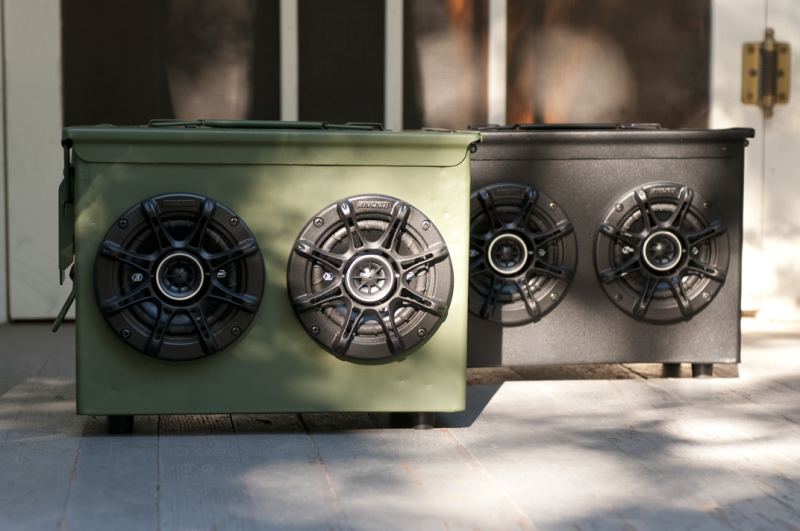 There is a big contention among online digital music services and offline sources. What do you think about the future of music services?

I really love being able to get music so quickly and inexpensively. Remember when you would go buy an album (for those of us old enough to remember records) and there would only be one or two good songs on it? Now you can just buy those two songs. Digital Music Services also allow artists like my friend Andy Shofner the ability to get their music out there without needing a recording contract, like in the old days. With the proliferation of software like Garage Band and Pro Tools, you can make music in your basement without a big recording studio. That's a big plus for those of us that like doing things ourselves.

Social media is a new showcase for the technology products. How do you use social media for Kulshan Bluetooth Speakers? How can our readers follow Cascade Sound Works?

You can find us on the interweb at www.cascadesoundworks.com and on Instagram @cascadesoundworks. I'm trying to get better at posting up on Instagram. I like when I get to see behind the scenes content on stuff that interests me, so that's what I tend to post. I think as we start to get out there, our customers will drive some of that content being posted as well. You'll start seeing how they bring their soundtrack with them!!

How can our readers buy Kulshan Bluetooth Speakers?

Right now we're just on the interweb - www.cascadesoundworks.com. We're working to get our speakers into the military bases because that is such a natural fit. Additionally, we're talking with stores like Cabela's and Bass Pro Shop. When we get there, my dad will think we've hit the big time!! 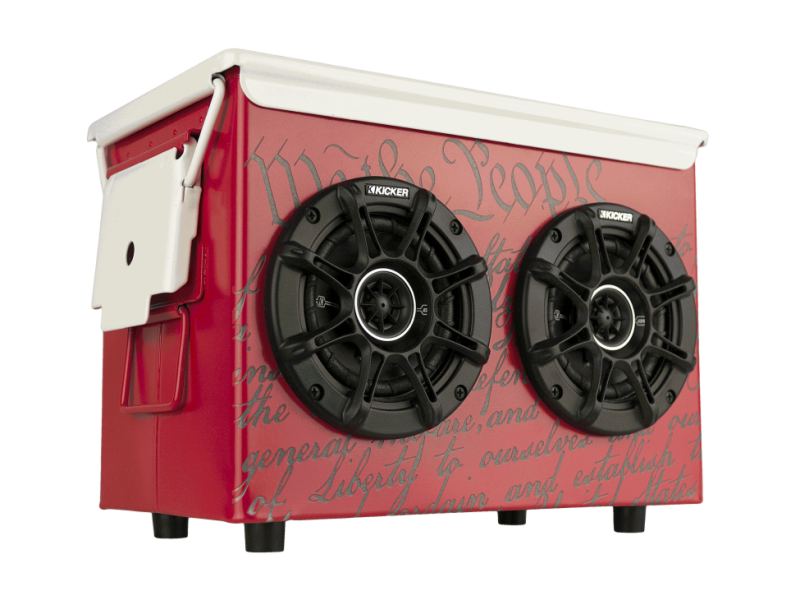 What is next for you and Cascade Sound Works?

When we've shown our speakers at gun shows, one of the most requested items is a solar panel charging unit so you can be off the grid. We're working on that. In keeping with the DIY spirit, I think it would be cool to offer a kit that someone could buy that includes all the components to put one together. It would eliminate all the trial and error figuring out wiring and component placement that I went through designing mine. I'll see if there is some interest first before I start down that path. We're also looking into Lithium-Ion batteries to reduce the weight of the speakers, but right now battery cost is a prohibitor. Perhaps it will be an option. We're trying to keep the base price down under $350, which is pretty good for a hand-made, low-quantity production item. When we get into the big box stores, I anticipate the base price will come down some more.

Anything you would like to add that I haven’t asked?

Thanks for your interest in Cascade Sound Works. It's a small business, just starting out. We appreciate all the support we've received so far from all our customers and fans. We look forward to seeing how you "Bring YOUR Soundtrack With You."