It is also known as one of the world's four major snow festivals with the Sapporo Snow Festival in Japan, the Quebec Winter Carnival in Canada and the Holmenkollen Ski Festival in Norway. 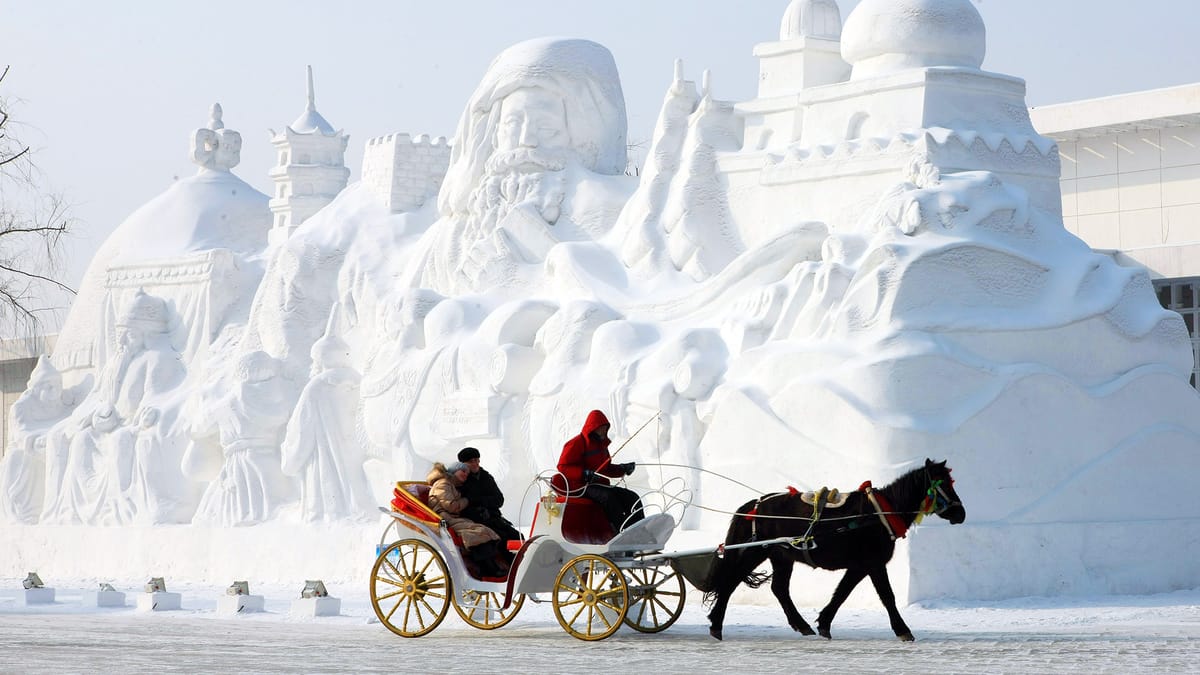 China's Ice City Harbin will hold a world-class ice & snow carnival to welcome the New Year. Audience will see grand buildings that are built by crystal clear ice cubes with colorful lights placed inside, such as the Chinese-style tower of five blessings, the snow-capped broken bridge, the scenery of Suzhou, the imperial palace, the world's largest Gothic Milan church, the Colosseum, the European castle gate, etc.

These splendid scenes will be staged when the city of Harbin embraces the New Year, as the Harbin International Ice and Snow Festival set to open on January 5. This year marks the 35th anniversary of the establishment of the festival, China's first ice-themed global event. It is also known as one of the world's four major snow festivals with the Sapporo Snow Festival in Japan, the Quebec Winter Carnival in Canada and the Holmenkollen Ski Festival in Norway. The ice and snow buildings here are even more grand and beautiful, presenting a Hollywood-style visual feast, according to the Information Office of Harbin Municipality.

Harbin is a regional center city in Northeast Asia and a center for cooperation with Russia. It was once a hub along the Chinese Eastern Railway and gathered many overseas Chinese. At the beginning of the 20th century, more than 160,000 expatriates from 33 countries stayed there, with 19 countries setting up consulates in the city. Harbin was then known as "Oriental Paris" thanks to the integration of Chinese and overseas cultures.

Harbin is also known as the "Ice City" due to its freezing winter. The main stream of the Songhua River passes through the city, making the river's banks the ideal gathering places for the Harbin people and the love for ice and snow activities part of the city's gene. Local people used to spontaneously freeze ice lamps in buckets, contributing to the birth of the city's winter extravaganza. When walking out of the house on winter mornings, one might suddenly spot these gifts made with ice and snow at the corner of each street.

Every January, the city is ignited by the strong passion for the ice and snow festival. Domestic and foreign tourists from all over the world gather in Harbin's "the Pearl on the Crown of Ice & Snow". The professional ice and snow sculpture competitions participated by world-renowned professional teams, college students and snow lovers have always been the focus of attention. Tourists will flood into the snow sculpture region, lingering in the whimsy of ice and snow works, even participating in the creation. Poets here will praise the ice and snow with phrases. The city will be basking in music after melody is added. The festival also attracts a lot of photographers who try not to miss every touching moment of the events, even unaware that their shoes have been stuck in the snow for a long time.

The 24th Winter Olympic Games will be held in China in 2022. Winter Olympics champions Shen Xue, Zhao Hongbo and Zhang Hong are all born in Harbin. The city also hosted the Winter Universiade and the Asian Winter Games, the first city in China to host world-class winter sports events.

In Harbin, ordinary people's enthusiasm for ice and snow sports is no less than that for professional competition. During the festival, people can enjoy many international-level events such as skiing, ice hockey, curling and other winter sports. Meanwhile, families will organize skating, snow football and outdoor fun games. Those who are bold enough and well prepared can jump into the winter swimming pool in the Songhua River. People can also carry a snowboard, bring their friends, and go to the Yabuli Ski Resort to feel the thrill of the race.

At the New Year's Eve event in Harbin Ice-Snow World, tourists can watch the e-sports competition during the day, and join the New Year's ice and light festival with dazzling DJ performance and fireworks to embrace the coming New Year. Everyone is welcome to Harbin to experience the magic and charm of ice and snow.