Mercedes-AMG A 35 4MATIC: New entry-level model opens up the world of driving performance 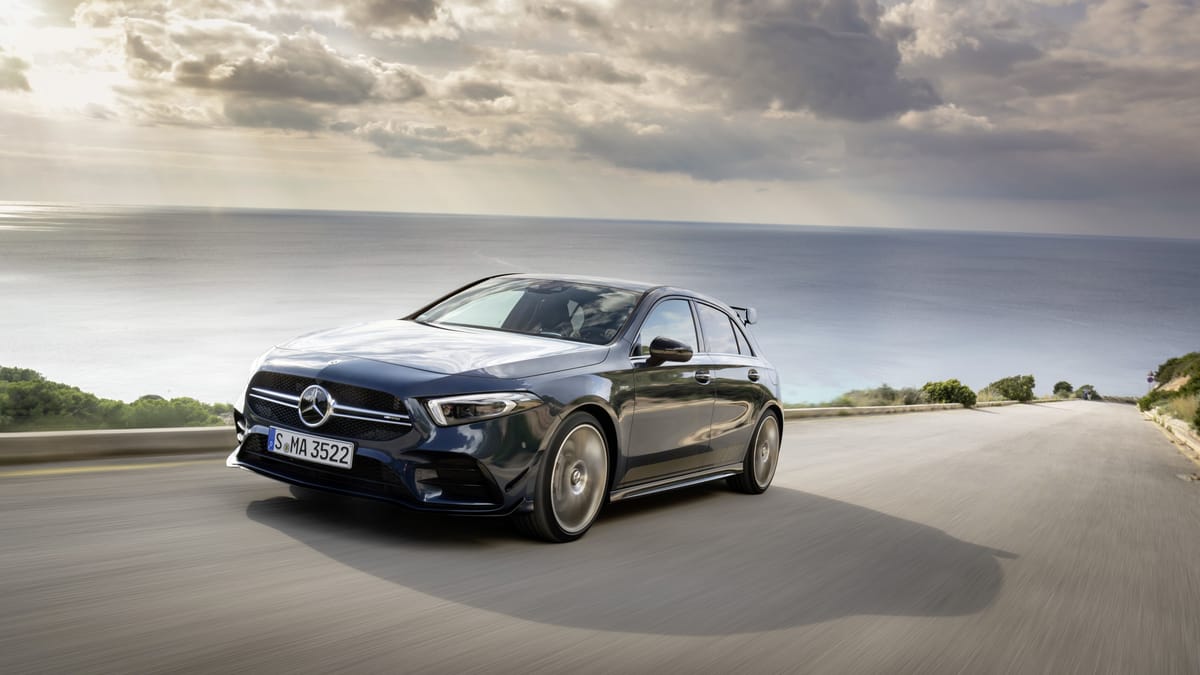 The 2.0-litre turbo engine in the A 35 4MATIC is an entirely new development and is based on the M 260 four-cylinder engine in the new A-Class. The new drive system boasts a spontaneous response to accelerator pedal commands, high tractive power (400 Nm max. torque from 3000 rpm), a supremely lively response and an emotional engine sound. The crankcase made of high-strength, lightweight die-cast aluminium reduces the vehicle weight where it matters most for driving dynamics.

The cylinders are divided into two cylinder groups and each is directed onto a turbine flow of the twin-scroll turbine. The cylinder groups are defined based on the ignition sequence. This results in a further advantage of twin-scroll technology, i.e. minimisation of the mutually adverse effects of the individual cylinders on the gas cycle. The exhaust gas back pressure is reduced and gas exchange and engine efficiency are improved. The water charge air cooler and the self-contained air intake (clean air line) support optimum power delivery and agility.

The exhaust system features an automatically controlled exhaust flap as standard. Depending on the drive program selected the sound is modulated from balanced to powerful. A silent start is programmed as the basic setting: the A 35 4MATIC always starts in quiet mode.

The AMG SPEEDSHIFT DCT 7G dual-clutch transmission also contributes to the agile and dynamic character of the new A 35 4MATIC. The gear ratios have been configured so that the driver experiences very spontaneous acceleration in all speed ranges, combined with fast shifting and optimum connections when shifting up. The standard RACE-START function allows maximum acceleration from stationary and is a highly emotional experience. The functions of the AMG SPEEDSHIFT DCT 7G transmission are rounded off with a temporary M mode activated by operating the steering wheel shift paddles in any driving mode, and with the manual transmission mode "M" for manual gear shifting with the shift paddles.

Dynamism, agility and performance – these three attributes characterise the standard all-wheel drive of the new AMG A 35 4MATIC. The variable AMG Performance 4MATIC combines the best possible traction with lots of driving fun. The torque distribution is infinitely variable to suit the dynamic handling requirements. The spectrum ranges from front-wheel drive only to a 50:50 percent distribution to the front and rear axles.

A multi-disc clutch that is integrated in the rear axle transmission is responsible for the variable torque distribution between the front and rear axles. It is controlled electro-mechanically. The influencing factors for torque distribution are not only the driving speed, the lateral and longitudinal acceleration and the steering angle, but also the difference in rotational speed between the individual wheels, the gear selected and the accelerator position.

The main advantages of electro-mechanical control over an electro-hydraulic system relate to sharper driving dynamics – primarily due to the significantly faster response and speed-independent actuation of the discs over the entire adjustment range. As long as ESP® is activated, the 4MATIC system stays in "Comfort" mode. As soon as the driver presses the "ESP® SPORT Handling" or "ESP® OFF" button, the 4MATIC system switches to "Sport" mode – for even more agile handling and even higher stability limits.