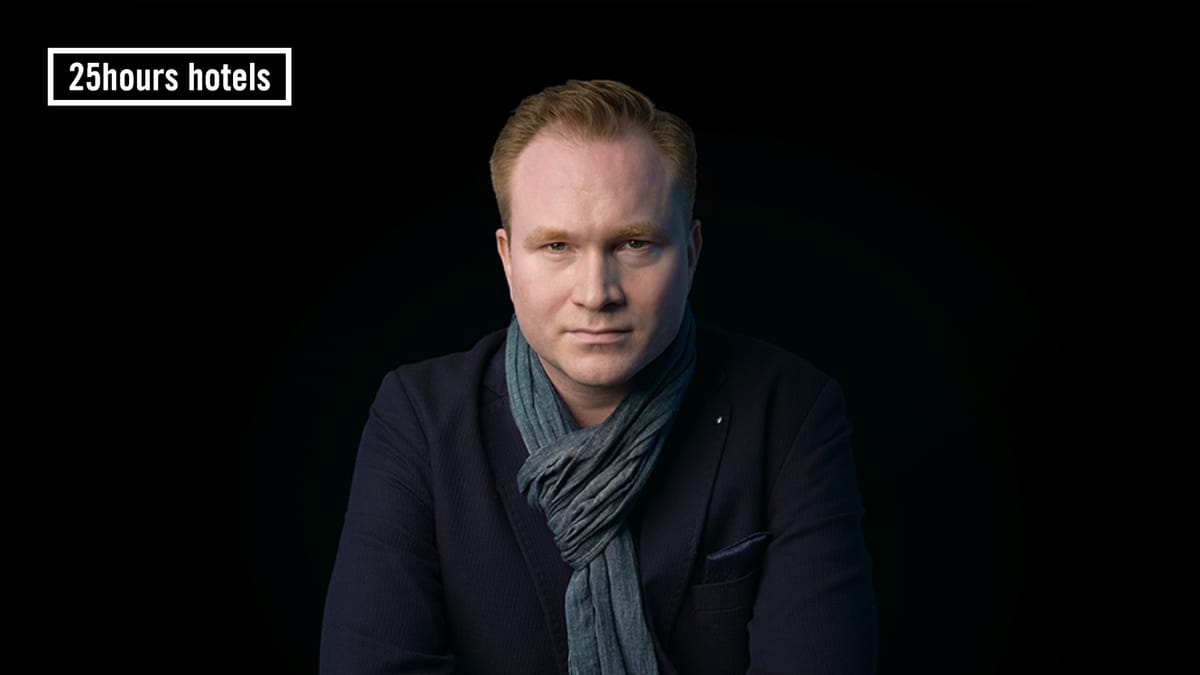 Dirk, before talking about 25hours Hotel Bikini Berlin, I would like to learn more about you. Could you briefly tell us about your 14 years of music industry career as a successful DJ, producer, and manager?

I had a passion for music since I was a little kid. As a teenager, I was singing in the choir and played drums in the school band. I used to put together the tapes for the school bus recorded from the radio. It turned out that collecting and presenting music was a talent of mine which brought me into DJing. I started at private parties and then two days after my 18th birthday I had my first regular DJ job in a local club. Techno and dance music blew up in the mid 1990s, and I had the chance to start in the music industry at BMG in Frankfurt as a promoter for club music. A short time after that, I was hired by Sony Music, and I ended up running the dance music department there.

Frankfurt to Berlin, DJ to Hotel Manager. How did you decide to put music back and pursue a career in the hotel industry? Could you tell us about your hotel management experience?

For many years I enjoyed the privileges of a music manager and DJ – travelling, fancy restaurants, nice hotels. All these benefits turned into a downside when I started my family about 10 years ago. I was feeling permanently homesick, and I was looking for a more steady job with less travelling. I had a fateful dinner with a hotelier. He said he was looking for someone who knows the city and is known by the city to run Berlin Mitte's most popular design hotel. Two bottles of wine and a few shots later I had the job as General Manager of Lux 11, at that time a member of Design Hotels. We opened a second boutique hotel, The Weinmeister also located in Berlin-Mitte, and we made it a hot spot for Berlin's music and fashion scene. After three years there I started for Intercontinental Hotel Group to run Hotel Indigo in Berlin. Next step has been nhow Berlin for NH Hotel group. Nhow Hotel has a music theme with a recording studio and a stage in the building, it has been a perfect match with my background in the music business. In 2017 I received the offer to become General Manager of 25hours Hotel Bikini Berlin. It has been a dream coming true. I have been fascinated by the success of the 25hours Hotels brand in general, and I love the Berlin property since day one. 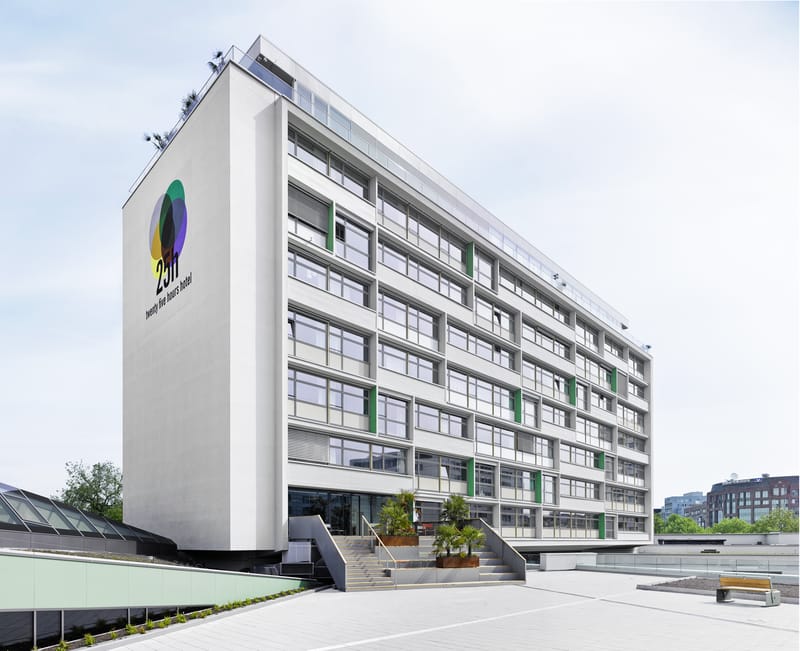 How did your music industry experience affect your hotel management success? What traces can we see from these experiences in 25hours Hotel Bikini Berlin?

I have an international network in the music- and lifestyle scene, and the city of Berlin is a hub for music-driven events. A lot of labels and agencies have their offices here, countless bands play in the many venues every day, and the club scene is internationally known. My nickname is Herbergsvater (warden) of the music biz. We push musical events at the hotel with concerts and showcases, and we have a lot of regular guests from the entertainment industry.

Could you tell us about 25hours Hotel Bikini Berlin and the overall concept?

25hours Hotels is a small group of hotels in Hamburg, Munich, Frankfurt, Düsseldorf, Cologne, Vienna, Zurich, and Paris. Next openings will be Dubai, Florence, and Copenhagen. The Berlin hotel opened in 2014. 25hours Hotels are sexy, cheeky, bold, innovative, cosmopolitan, unique, charismatic, a little crazy, and locally connected. Our hotel is a social hub. A place where international travellers and local guests form a community, entertaining and being entertained. 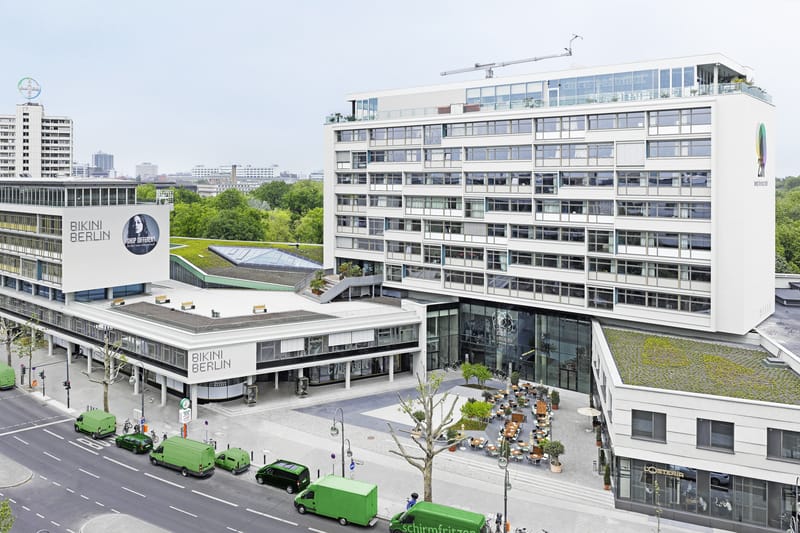 Where is 25hours Hotel Bikini Berlin located in?

The hotel is located in the Bikini complex right between Kurfürstendamm and the zoo. The property is a monument listed building from the 1950s that is also home to a concept mall, a movie theater, and office spaces. The initial purpose of the building was to protect the animals in the zoo from the noises of the city. As Berliners love to give nicknames to their iconic buildings, the property was named Bikini as the facade of the office part of the property reminds one of a bikini. 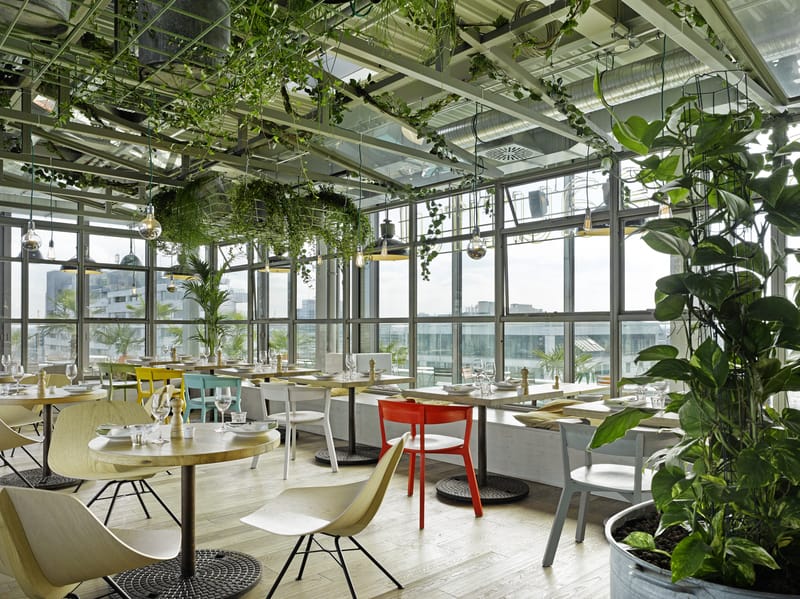 The hotel has an urban side, the rooms facing the buzzing city with a view to the iconic Kaiser Wilhelm Memorial Church and the skyline. The rooms on the other side overview of the zoo and Berlin's biggest park Tiergarten. It is a glimpse into the green with a view to monkey, giraffes, and elephants. This is the background of the urban jungle concept. The interior design by Studio Aisslinger plays with these contrasts. We have a lot of green plants and also a lot of concrete, just like the neighbourhood. 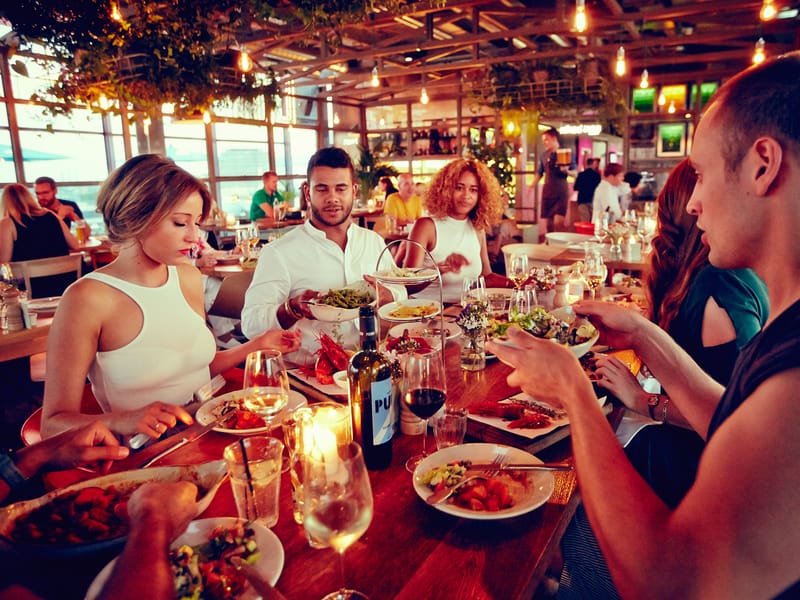 Our restaurant NENI and Monkey Bar are located on the 10th floor of the building. The floor has been built like a greenhouse on the roof of the existing building which stands for a 360-degree panoramic view over the city and the zoo. NENI Berlin offers Israelian cuisine with a Mediterranean twist. The kitchen concept is by Haya Molcho, who runs the original NENI restaurant in Vienna. The restaurant is very popular to Berliners. The adjoining Monkey Bar is one of the busiest bars of Berlin. Guests can enjoy a wide range of drinks and a DJ- and live music every night. 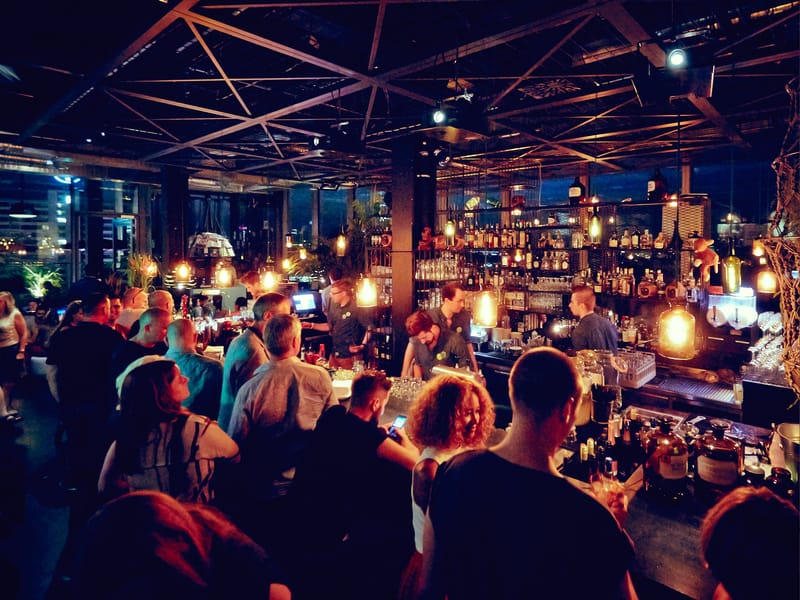 What kind of events do you host?

We run our own events with concerts, lections, and performances. All kinds of artists have their showcases, release- and aftershow parties at the hotel. We team up with radio stations and internet music channels for broadcasts and live streamings. 25hours Hotel Bikini Berlin is a popular place for influencer events and lifestyle product launches. 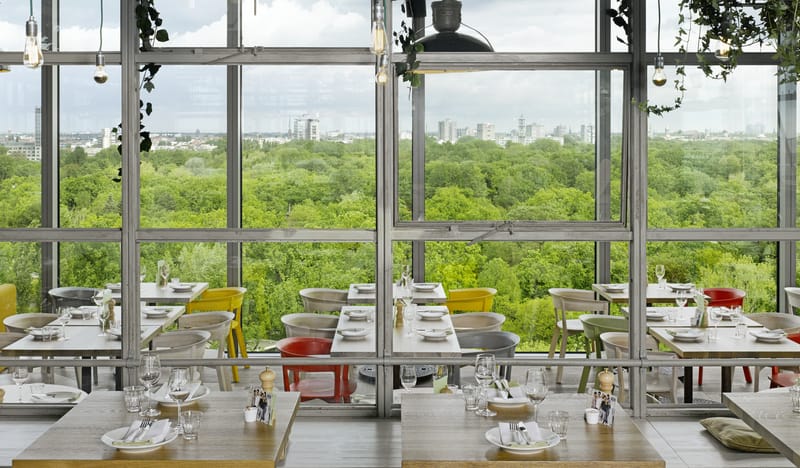 What features of 25hours Hotel Bikini Berlin sets it apart from other hotels in Berlin?

The location is one of a kind. But it is the mixture of the design, the amenities and mainly the people coming to the hotel. The hotel is a place to meet and mingle, to catch up with same minded people, to start friendships. 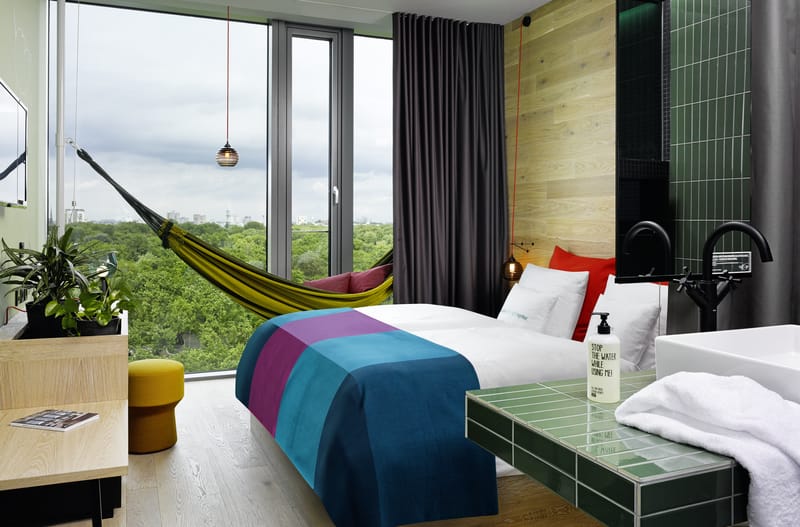 You have two major types of rooms, Urban and Jungle. What are their features and average price range?

The Urban rooms face the city, the Jungle Rooms have a view of the zoo and park with floor- to ceiling windows. Some of them are equipped with a hammock, and you will be woken up by the sounds of the animals in the morning. All the rooms come with free WIFI, a minibar, a UE Bluetooth boombox, and a designer shopping bag to borrow during your stay. Rooms rates start at EUR 150.- 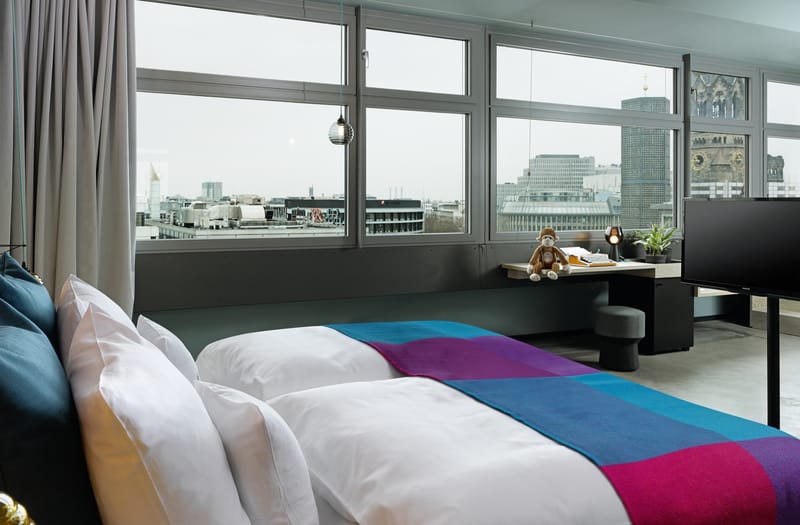 Our guests love to hang out in our hammock corner in the reception area. Our bakery offers snacks and drinks to enjoy on the terrace – or at the fireplace in the winter time. A highlight is a sauna on the 9th floor with a panoramic view into the green. Hotel guests have direct access to the Monkey Bar and can skip the queue in front of the elevator on the ground floor. Guests can rent out Schindelhauer bikes or a MINI to explore the city. 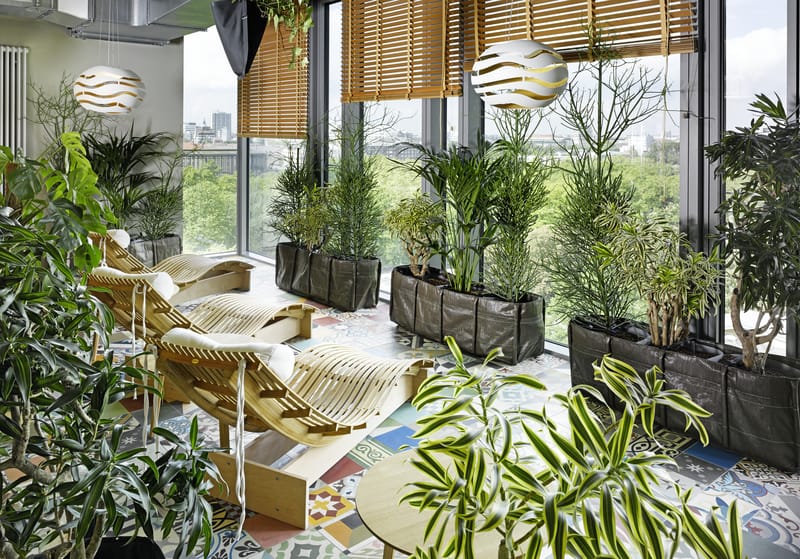 Could you tell us about the advantages and disadvantages of being a part of a hotel chain?

Being part of a group brings you a certain brand awareness. Guests who have stayed at one of our sister properties arrive in joyful anticipation. While our hotels do not have the feel of a chain hotel and have kept their individual vibe we benefit from our very well organized head office in Hamburg, especially in terms of sales & marketing and operations. 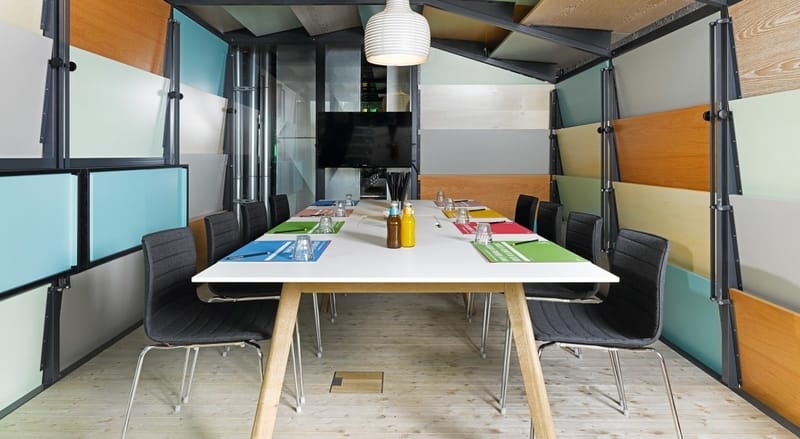 What kind of additional services do you offer for business travelers?

We have three meeting rooms at the 25hours Hotel Bikini Berlin with a capacity of up to 80 guests. A part of our lobby can be separated and used for exclusive events, receptions, or product presentations. Of course, WIFI is included, and we have a workspace with Apple iMacs in the public areas.

How can travelers make their individual or business/group reservations? Do you have any advantage packs that you offer to your guests?

If you want to make your stay extra special I always recommend booking directly with us. At least leave a remark in the comment section of the booking engine or even better email us and let us know your requirements or the special occasion of your stay. 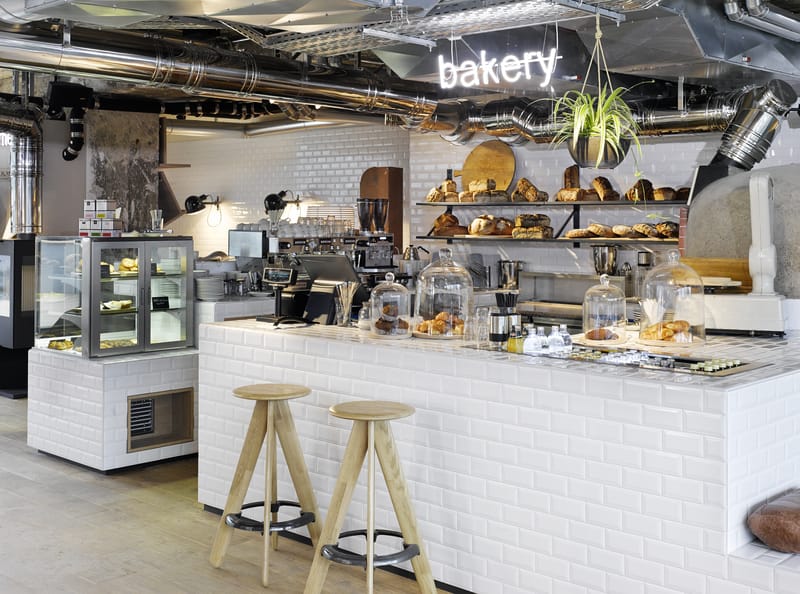 Which is the top season for travelers who want to visit Berlin? What is the reason? What are the most famous attractions near you?

Berlin is worth a visit all over the year. Spring- and summertime are the most enjoyable as the city is green and the atmosphere on the streets, in the parks and on the riverside is just great. But you should make sure to visit the many Christmas markets as well. Many visitors come for the nightlife and the countless cultural events. We are located right next to the zoo, a visit to the Pandas is a must. The Kaiser Wilhelm Memorable Church is right across the street, and the shopping boulevard Kurfürstendamm with the famous KaDeWe department store is just a short walk away. Brandenburger Tor and the Reichstag are also in walking distance. 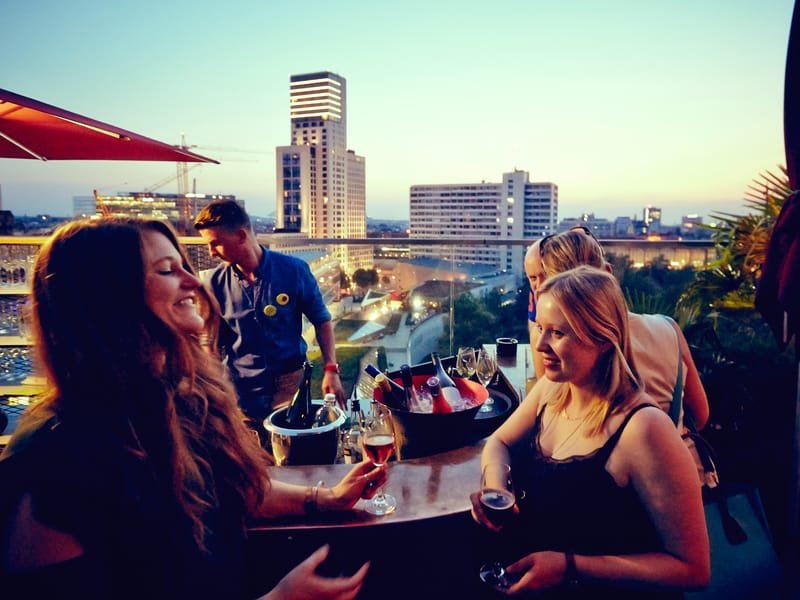 If you have only one weekend in Berlin as a first-time visitor, in this limited time, what are the best things to do?

Start the day with a visit to the TV tower and get an overview of the city. Then get on a boat and do a roundtrip on the river Spree as the city looks beautiful from the waterside. Have a stroll at the fashion district around Hackescher Markt and do not miss the delicatessen department at KaDeWe. Plan some time for a walk on the runway of the closed Tempelhof Airport and do not leave without saying hello to Bini the Orang Utan at the zoo. We have a sponsorship for her and the proceeds of the "Bini's Monkey Ponkey," a cocktail served at our Monkey Bar, finance this sponsorship.

How do you describe Berlin in one sentence?

Berlin is vibrant, inspiring, and funky !!!

Thank you Dirk for your time.