Jessica Angel is an artist who photographs dance. She reflects the values represented by Afro Cuban Rumba in her vibrant photographs. I talked with Jessica Angel about the details of her latest exhibition, Liquid Heat | La Rumba Llama. 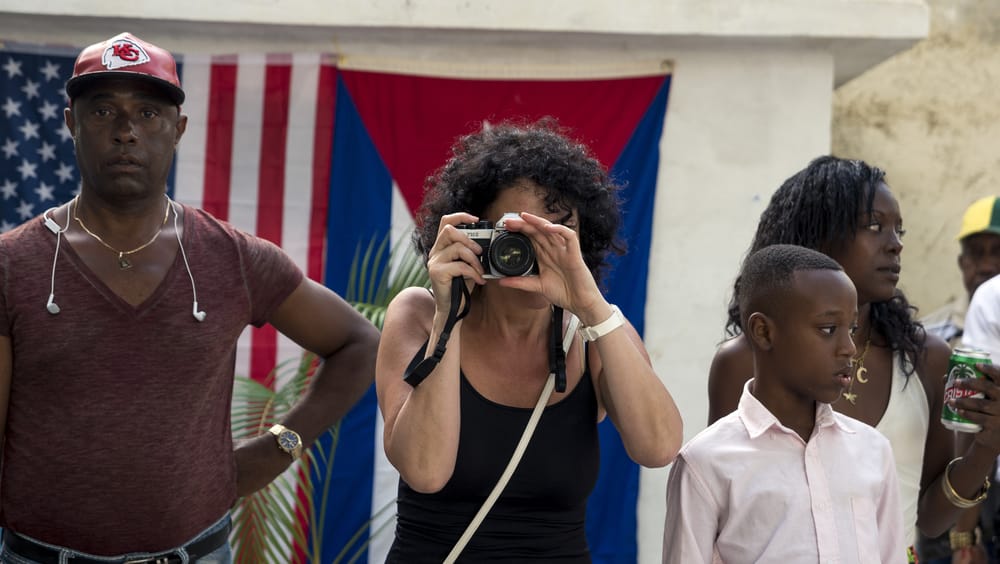 Jessica Angel is an internationally recognised artist, working with photography, dance, and the moving image. Over the last 20 years, Angel has captured dance on camera with exhibits at; RAW SPACE, Harlem; United Nations, NYC; Museo Casa Guayasamin, Havana; and, Laban Theatre, Queen Elizabeth Hall and Jerwood Space in London. This year her international public art project Liquid Heat that brings together photography, dance, and education to celebrate Afro-Cuban Rumba, returns to Harlem as part of HARLEM WEEK with an eclectic new program. I talked with Jessica Angel about her career and the details of Liquid Heat | La Rumba Llama.

Jessica, before talking about Liquid Heat | La Rumba Llama, I would like to learn more about you. When did you get your first camera? Do you remember the first photo that you took?

I got my first camera when I was twelve years old, and the first memorable photograph I took was one of my dad and brother fishing on the beach, I caught them completely unaware.

Could you tell us about yourself?

I have an eclectic set of influences that cross over into a number of sectors. I am an artist, and I work with a camera, I am also a dancer although I don’t have a technical background, I started to perform through Cuban dance. I recently finished an MA in Creative Practice, and I have also had a long career as a corporate trainer, training and coaching very commercial skills in a very commercial environment. I have always worked cross-culture and cross-language, so I have a very fluid sense of identity. 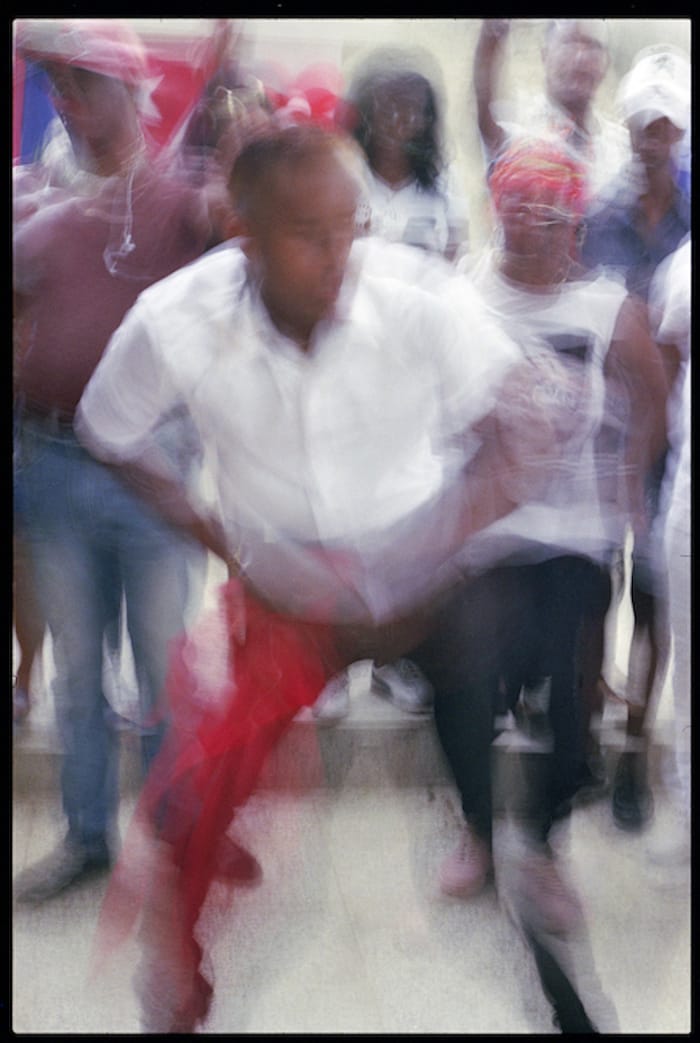 I first started making films at University, and when I graduated, I went on to work in some of the newly formed production companies that were producing programs for Channel 4 which was very new at the time and commissioning exciting documentaries. After a few years, I felt that making films was going to be a huge exercise in trial and error and patience around funding, so I decided that I wanted to be more empowered in the process and began taking photographs. The process of working with a moving image in my filmmaking influenced the way I worked with a still camera and had me experimenting with tracking movement.

When did your interest in contemporary and Latin dance begin? How did you decide to put dance at the centre of your photographic career?

When I moved away from television I also coincidentally started to dance. Cuban dancer Rodolfo Fournier opened a class in London, and he was my first instructor. I then started going to Cuba, I had always wanted to go as my grandmother and my uncle lived in Cuba before the revolution. 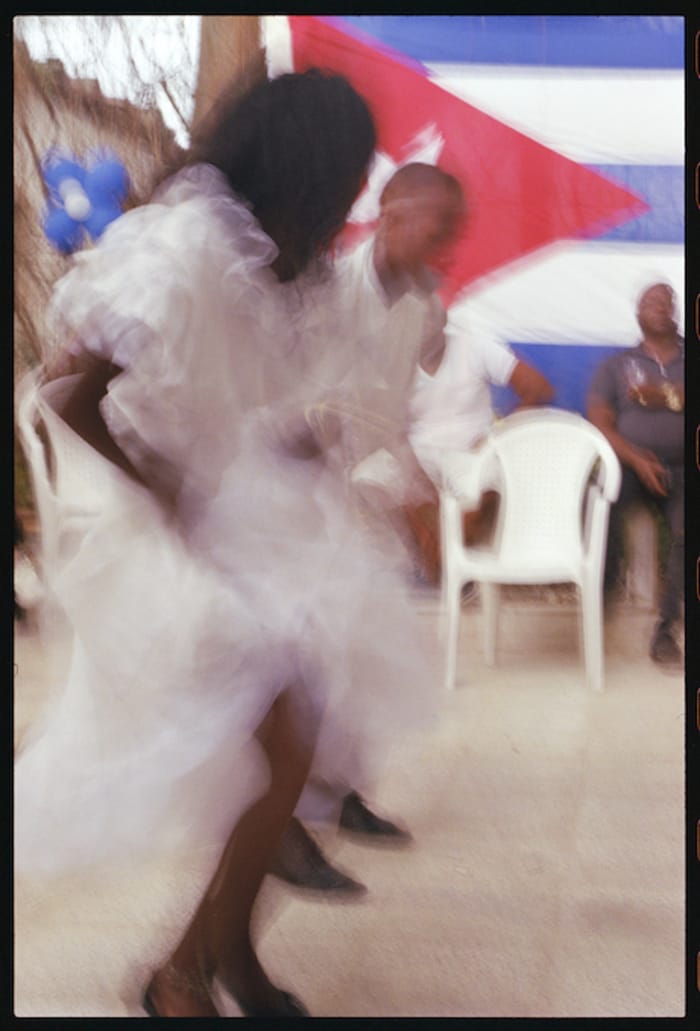 Can you tell us about your photographic approach, your style?

My photographic approach is very much about evoking in the viewer the feeling of dancing and the freedom of movement.

How did the Liquid Heat | La Rumba Llama project come about?

The Liquid Heat project was an idea I had about 18 years ago. Initially, I wanted to create murals for East Harlem, which is a Hispanic neighbourhood. Once I really started to take Liquid Heat forward, it took five years to build relationships and obtain political engagement within the Harlem community. In parallel, I was working with Santiago Alfonso, a key figure in the dance community in Cuba, to create an exhibition for Havana. Santiago and I decided to take that exhibition to Harlem last year. 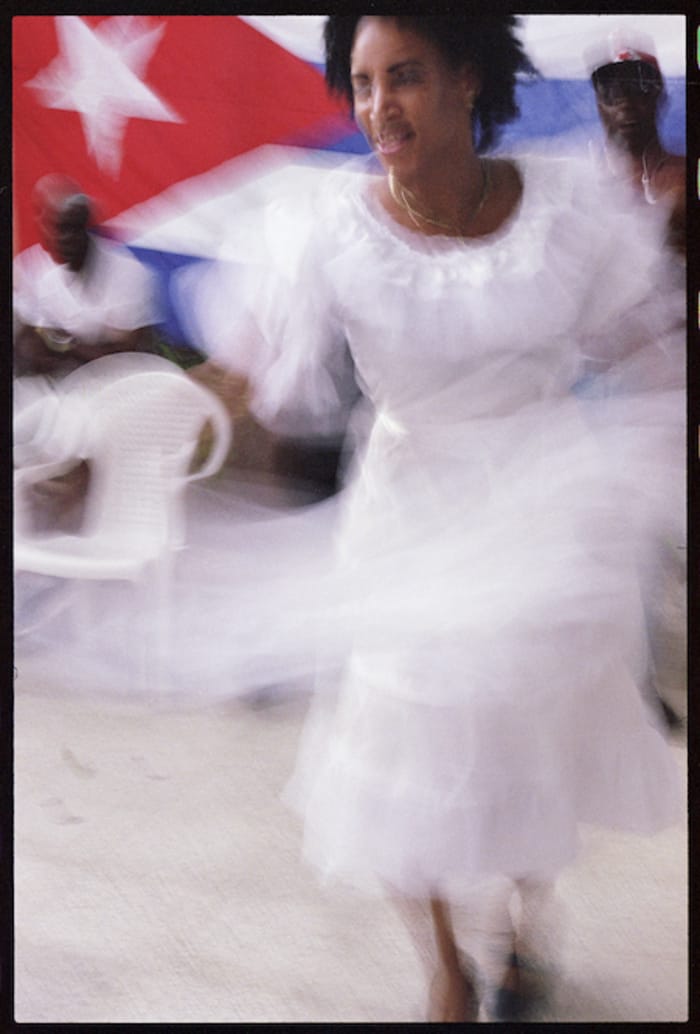 Who did you collaborate with to conceive this project? Who are the dancers we can see in these photographs?

Santiago Alfonso, a household name in Cuba and one of the judges for the Cuban version of Strictly Come Dancing, mentored the project and got the whole thing started in Havana with the Ministry of Culture. This year I wanted to collaborate with Luanda Pau and her father Domingo Pau, renowned dancers and teachers in Cuba who are deeply involved in the Pogolotti community which is where I took the photographs for this year’s exhibition. The photography exhibition will be accompanied by a custom-made soundtrack including a reading by actor Alden Knight of one of Afro-Cuban poet Nicolás Guillén’s poems set to Rumba percussion by musician Roman Diaz.

What is the message behind these images?

Rumba on the surface is about the fun of the chase, boys trying to show off to girls, girls trying to seduce boys, but underneath it all, it’s really about communion and community in the broader sense. Afro-Cuban rumba is like a channelling of energy that moves around from the dancers to the musicians. It’s a very free dance, and everyone dances it in their own way. It is all about how you connect with your own spirit and through that how you connect with everyone else. We live in a time when everything is so externalised, and the focus is on how we are perceived, yet we are so out of control. The message I want to portray through my work is how we can we pull the energy back into ourselves and stay rooted and connected to ourselves and others through community and dance. 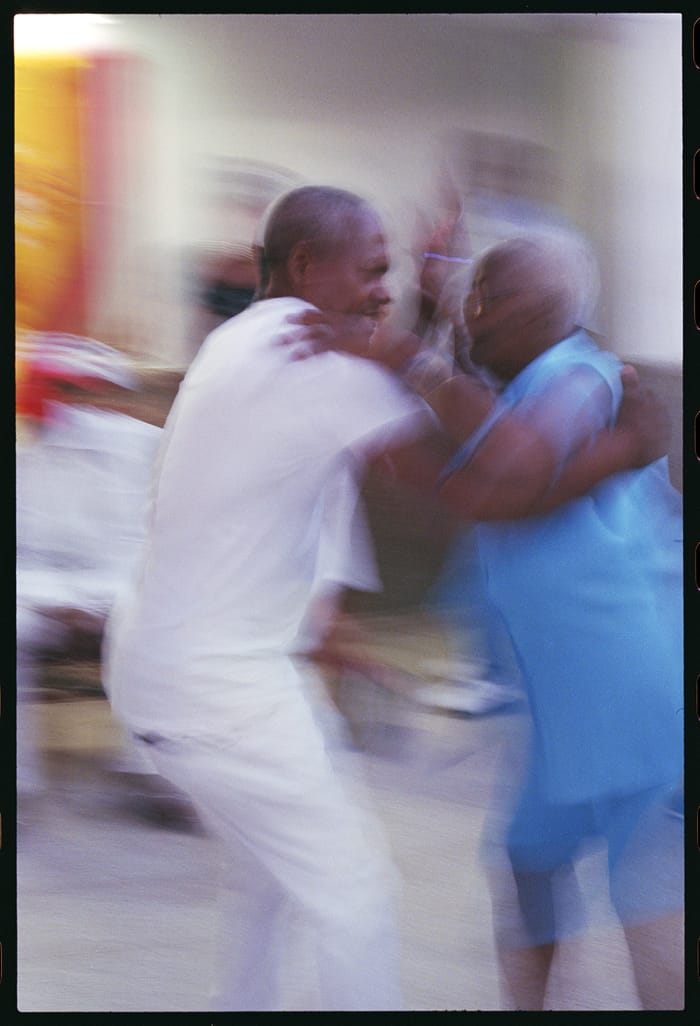 Liquid Heat | La Rumba Llama will be exhibited as part of HARLEM WEEK. Could you tell us more about HARLEM WEEK?

I am so proud that the project is part of HARLEM WEEK this year celebrating its 45th anniversary. Since its beginnings in 1974, HARLEM WEEK has continuously showcased and celebrated its communities rich African, African-American, Caribbean, Hispanic and European history, culture, arts, religion, entertainment, and sports. It has become a huge event that attracts about two million people over the course of a month. Last year Janet Jackson made a surprise appearance.

Liquid Heat is an international public art project that brings together photography, dance, and education to celebrate Afro-Cuban Rumba. Running alongside the photography installation, Ritmo y Color, a free dance program for children aged six to twelve years old run by Cuban dancer and choreographer Luanda Pau, will take place in the exhibit space at Harlem Hospital Mural Pavilion between Monday, August 12th and Friday, August 16th. The children will give a final performance to the public on Saturday, August 17th and then a traditional Cuban Rumba will take place with Cuban musician Melvis Santa and her group Ashedí. The Rumba will include live music, a Rumba demonstration, a class with Luanda Pau and then a Rumba gathering for everyone to join in. 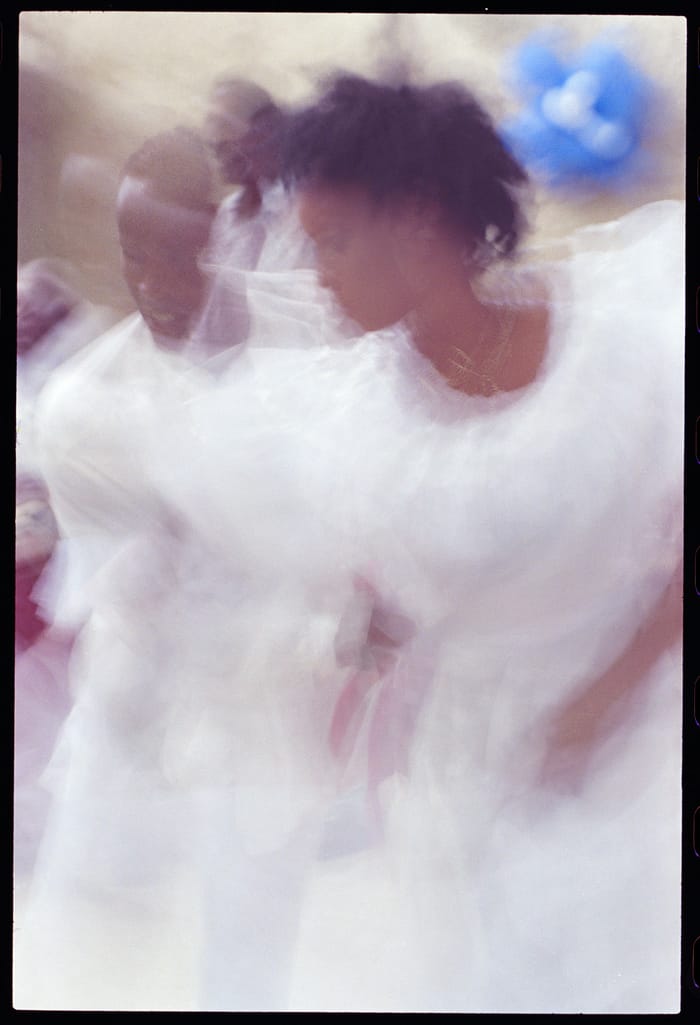 When and where can our readers visit the Liquid Heat | La Rumba Llama exhibition?

Liquid Heat is being hosted by the Harlem Hospital Mural Pavilion, home of the historic WPA murals painted in 1936 - the first public art commission to be awarded to African-Americans. The photography exhibition will take place from Monday, August 5th to Monday, September 30th.

I’ll be going back to Harlem next year, Liquid Heat is a program that will continue to grow, and I will continue to build connections within the community. I’m also in the initial stages of planning a project for London next year. 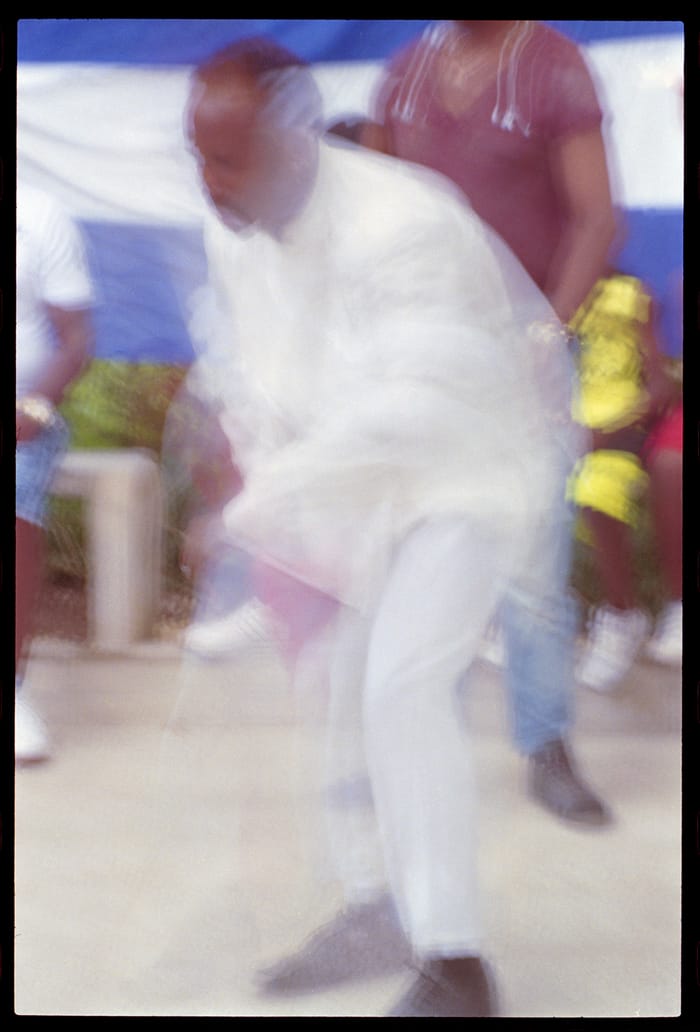 is a link to the Go Fund Me page, money raised will help cover the costs of the children’s classes. $300 will cover one child for the week, and the rest will support the extended community program.

Thank you Jessica for your time.